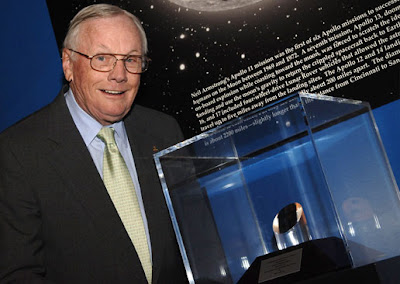 Dr. Neil Armstrong, commander of Apollo 11 and first man to walk on the Moon, has written a response to an editorial appearing in the Wall Street Journal Online, December 17.
Dr. Armstrong makes a strong case that United States engineering and science policy decisions awaiting the Obama Administration should be made by scientists and engineers.

Surprisingly, Dr. Armstrong seems to suggest NASA's recommendations are, on their face, based not upon political expediency but are an end result of the scientific method. Even in the context of NASA policy based on the mostly sound and rightly-respected opinions issued by the National Academies, there are more than a few who would disagree. Had anyone other than Dr. Armstrong issued such a statement it would have immediately become controversial. But respect for Dr. Armstrong's opinions arises from more than just his having been commander of the first manned mission to the lunar surface.

Always a civilian, with a well-deserved reputation for plain and instinctive brilliance and cool, Dr. Armstrong's opinion carries a lot of weight, and all the more because his is not an opinion he issues often.

Off the record, I can't help but wonder if his apparently blanket respect for NASA as an institution and creature of Congress is shared by the only scientist to visit the surface of the Moon, former New Mexico Senator Dr. Harrison Schmitt.

You recently reported on the decisions that the new administration will face in connection with the American manned space program ("Tough Decision Looms on Space Shuttle's Fate," U.S. News, Dec. 17). Your article indicated that President-elect Barack Obama's transition team "faces a tough early choice between extending the life of the aging space shuttle and accelerating its replacement."

I certainly hope that isn't accurate, in that the transition team should play no part in such decisions. While these men and women are experienced and enthusiastic space program veterans, they are neither aerospace engineers nor former program managers and cannot be sufficiently knowledgeable to make choices in the technical arena.

The transition team does have the responsibility to collect information to assist President-elect Obama in understanding the issues and decisions he will be facing. The making of decisions of such import, however, is the responsibility of the president and should be guided by the best advice from the most able and skilled experts on the subject. He should have no difficulty receiving high-quality information from NASA. Engineers are painfully honest and insist on presenting any assumptions used in their decision process. Therefore a conclusion can only be challenged when an erroneous assumption can be identified. Because this approach is somewhat unfamiliar in business and politics, its importance is often overlooked.

A great deal of thought and analysis has gone into NASA's program to return to space exploration as the principal focus of the agency. The breadth of NASA's creative thinking was limited by the funding constraints, and compromises had to be made. Even so, the agency has fashioned a challenging but credible program to return to the moon and go on toward Mars.

NASA's management is very strong and its engineering and scientific talent extraordinary. I believe they can be counted on to deliver new knowledge, excitement and inspiration as they continue their expansion of the human boundary.