Enough with the LRO "Milestones" 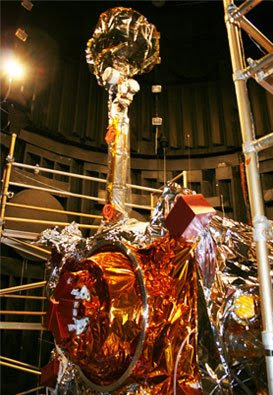 A flurry of LRO "milestone" PR is again being peppered over the web. Considering their late 2008 launch window was exchanged with the Department of Defense, and the long-anticipated Lunar Reconnaissance Orbiter is now apparently scheduled for launch in late April 2009, the last "milestone" I'm interested in at this point is timely, high-powered images from Lunar Orbit.
Nevertheless, out of deference and well-earned respect for the LRO team and for Goddard,
According to a NASA press release:

The orbiter will carry seven instruments to provide scientists with detailed maps of the lunar surface and increase our understanding of the moon's topography, lighting conditions, mineralogical composition and natural resources. Data returned to Earth from the Lunar Reconnaissance Orbiter will be used to select safe landing sites, determine locations for future outposts and help mitigate radiation dangers to astronauts. The spacecraft will spend at least a year in a low, polar orbit approximately 30 miles above the lunar surface while the instruments work together to collect detailed information about the moon's environment.
Posted by Joel Raupe at 5:59 PM

Excellent post and I would like to add the following. With LRO's launch set for April, 2009, at last we are taking the first steps back to the moon. LRO will be the first mission with a primary objective to implement the United States Vision for Space Exploration. The Vision for Space Exploration is the United States space policy announced on January 14, 2004 by U.S. President George W. Bush. I believe the LRO is a lot more significant then many people realize. At last, we are taking the first small steps of human exploration of space, and even though LRO is simply a non-manned probe for the acquisition of
lunar data, it should lead eventually to sending humans back to the Moon, which is supposed to be a stepping stone for eventual Mars exploration. For more news about space visit Space News.