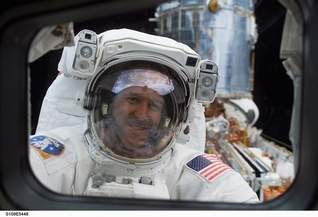 Florida Today - Two days after President George W. Bush directed NASA to return American astronauts to the moon, John Grunsfeld stood in support of a decision to kill a Hubble Space Telescope servicing mission deemed too dangerous after the Columbia accident.
Flying aboard shuttle Atlantis, Grunsfeld and his crewmates aim to install two new Hubble science instruments, resuscitate two others and outfit the observatory with new batteries and gyroscopes that will enable it to operate through at least 2013.
For an encore, Grunsfeld will use his telescope time to do research that has wide public appeal, a link to human spaceflight and significant scientific merit. "What I want to do with Hubble is shoot the moon," he said.
Grunsfeld will help equip Hubble with a new planetary camera and then use the instrument to examine ultraviolet light reflected from a huge crater on the face of the moon. The idea is to prospect for minerals, such as titanium oxides, that could be converted to breathing air or even rocket fuel at a moon base.
Read the rest of the story HERE.
Posted by Joel Raupe at 2:10 AM