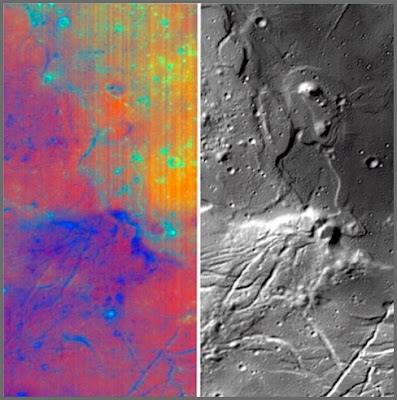 IMAGE CREDIT: NASA/JPL/BROWN UNIVERSITY: Different wavelengths of light provide
new information about the Orientale Basin region of the moon in a composite image
taken by NASA's Moon Mineralogy Mapper, a guest instrument aboard the Indian
Space Research Organisation's Chandrayaan-1 spacecraft.
A flurry of news hinting incorrectly of a "discovery" of Iron compounds on the Moon should do little to detract Brown Univerity's "3M" instrument being listed among NASA's top science, exploration and discovery stories of 2008. Thankfully, NASA JPL has been kind enough to put together a website with the latest information available HERE. (Which, in turn, should take nothing away from the growing, informative M3 Science Blog maintained by Brown.)

Iron oxides, particularly on dark "reddened" Near Side mare regoliths, are well-known markers of lunar morphology, for example "optical maturity," or "OMAT," though this last single example may only reliably demonstrate the exposure of small areas on the Moon's surface back 500 to 900 million years. Cosmic Iron also bonds well and marks with Titanium and otherwise volatile elements such as Oxygen.
An abundance of Thorium, a definite source of fuel for fission power, also marks the lunar maria on the Near Side. Japan's Kaguya team reports point signatures of isotopes of Uranium also, as a growing international fleet of lunar orbiters add anticipated detail to our knowledge of the lunar surface.
Brown University's "3M" Moon Minerology Mapper, set to fly on NASA's LRO (Lunar Reconnaissance Orbiter) as early as late April has a twin on-board India's Chandrayaan 1, which arrived in lunar orbit in November.
Brown 3M Principal Investigator Carle Pieters has commented on the most detailed minerology map of the lunar surface, part of the Orientale Impact zone, unveiled December 17.

“The Moon Mineralogy Mapper provides us with compositional information across the moon that we have never had access to before”, said Pieters. “Our ability to now identify and map the composition of the surface in geologic context provides a new level of detail needed to explore and understand Earth’s nearest neighbor.”

The image revealed changes in rock and mineral composition, indicated the abundance of iron-bearing minerals such as pyroxene, and provided a new level of detail on the form and structure of the region’s surface.