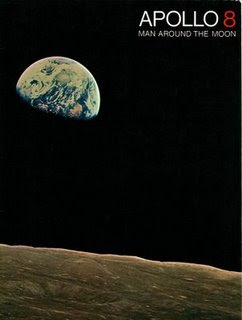 At the risk of becoming unnecessarily nostalgic, David S.F.Portree of Flagstaff is among those best equipped to keep the fires burning when comparing the vision of tomorrow from yesterday with the realities of today, when examining the fifty year history of manned space exploration.
"A new look on Space History," David's "ALTAIR VI" was where, after some deductive reasoning and post-Apollo history he once discussed, I was led to discover the amazing similarity between manned space architecture some at NASA tried to sell Congress and President Nixon as alternatives to the Space Shuttle strongly resemble the ATV program now in use by ESA.
Along with David's rememberence of the largely forgotten effect Apollo 8's first manned trip to the Moon had on so many of us who were but children, forty years ago this month, his use of the famous image that soon appeared on Life magazine's cover, at the end of 1968, reminded me of what a joy it is that we have a restored version.
Astronaut Bill Anders, Command Module Pilot on-board Apollo 8, shot the image forty years ago, and like all the Apollo images in the years that would follow, it was reproduced into a blurry, bleeding inprecise print media at far below their potential quality.
Now, however, through the Apollo Surface Journal and elsewhere, the HR versions of the Apollo suites of images are being made available, and with an average to good monitor, four decades of patience has finally paid off.
It's like those images were taken yesterday.
As I've written before, when the day arrives that NASA can finally understand the purely entertaining value of space exploration, they will no longer need to worry about funding.
Posted by Joel Raupe at 3:29 PM