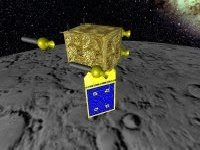 Apparently, we're not the only one's who've conjectured over the reasons for delays in receiving images from China's Chang'E 1, Japan's Kaguya and India's Chandrayaan 1. With regard to the latter ISRO platform of the three present lunar orbiters, soon after its arrival at polar orbit of the Moon ground controllers released a 35 kilogram impactor equipped with a high-resolution camera.
Chandrayaan's impactor struck near the lunar south pole, it's last images reportedly barely more than three kilometers above the surface. Indiaprwire reflects an even higher patriotic anticpation of the release of the the 3200 frames taken by the impactor that struck the Moon November 14.
"It is a set of pictures that is among the most anticipated in India - the descent of the first-ever Indian-built device to the moon's surface."
The article from Indiaprwire was otherwise interesting from a science standpoint, comparing the resolution capacities of all three of the present lunar orbiter fleet, and highlighting the logistic problems of balancing spacecraft health monitoring, particularly after recent overheating problems briefly threatened the entire ISRO mission. with other time demands over India's particular Deep Space Network. Each second of imaging requires three and one half seconds of download time on their network, for example.

The impactor's final 3200 frames are on Earth, and features resolved on the surface are being painstakingly identified. While Indiaprwire reports a release of the fill set of images may be weeks or even months away, Techtree.com reports such a release will happen "soon."

While the particulars are not completely lost in translation, Techtree.com also reports "details" of the planned Chandrayaan 2 lunar lander, planned for 2012, have been released. While the original Soviet and American landers utilized "direct to landing" trajectories, the hazy schematic accompanying the Techtree.com article appears to show a terminal descent from lunar orbit design, a sample collection rover and, just as the Chinese are planning for Chang'e-2, leaving open the possibility of sample return.

Interestingly, Techtree writer Jayesh Limaye reports all ISRO activities were "earning about Rs.10 billion annually from its commercial wing and this is expected to grow at a brisk 20 percent each year."

Hi! What's the matter with the lunar pictures? Are they presented anywhere on the internet? if you know, please send me a link to them. Thanks!
zelasoft@yahoo.com

Yes, we would ALL like some photographs which are not modified or blurred like the ones that NASA release. Come on India, show us how it should be done! I challenge you to release your pictures without any airbrushing, blurring, or other modifications to them. Sowehow, I dont hold out much hope though - NASA has a lot of influence in the area of space exploration.