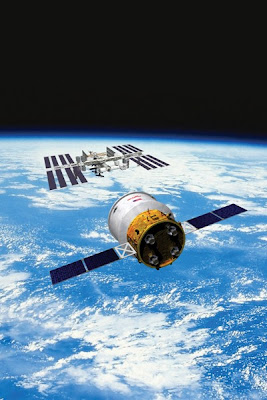 Orbital Sciences ATV CYGNUS on approach for docking at ISS, on
one of eight contracted flights between 2011 and 2015 -
Artists Rendering by Orbital

More from Virginia on Orbital Science - SpaceX - ISS Contract
Loudon Times-Mirror (Leesburg) - Shannon Sollinger Dec. 26 NASA has awarded a long-term contract worth up to $1.9 billion to Orbital Sciences Corp. of Dulles (Chantilly) Virginia.
Under the contract, Orbital will transport about 20 metric tons of cargo in eight separate missions, from 2011 to 2015, to and from the International Space Station as it orbits the Earth.
Orbital has scheduled a demonstration flight in late 2010, said Chairman and Chief Executive Officer David W. Thompson. NASA's Commercial Resupply Services award to Orbital, Thompson said, will showcase "the types of commercial services U.S. space companies can offer NASA."
Orbital's Commercial Orbital Transportation Services (COTS) is based on the company's new Cygnus maneuvering space vehicle. Cygnus is made up of a service module (propulsion, power systems and avionics) and one of three specialized cargo modules. Cargo modules can be pressurized or unpressurized and can include return cargo service.
Now in development is the Taurus II medium-lift launch vehicle.

Preparations for the first flight are under way at the Dulles headquarters and space vehicle engineering center; at the Chandler (AZ) launch vehicle operations; and at the Wallops Island payload processing center on Virginia's eastern shore. Orbital announced it will test the first-stage engines of the Taurus II rocket at NASA's Stennis Space Center in Mississippi. Preparations for the launch have begun at the Mid-Atlantic Regional Spaceport at Wallops Island.
More on Cygnus ATV (Adobe PDF)
Posted by Joel Raupe at 8:31 PM