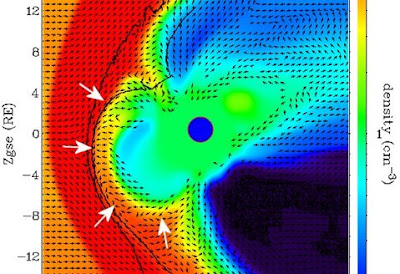 NASA Science News service is reporting this evening of a "Giant Breech" in the sunward side of Earth's wider magnetic field "ten times anything ever detected."
The data comes from analysis of telemetry from the five THEMIS satellites mapping Earth's natural protection against solar particle events like solar flares and the steady proton wind that oscillates to highest intensity at Solar Maximum.
This is not the so-called South Atlantic Anomaly where belts of energetic particles remain trapped in the Van Allen Belts, constantly recharged by the interaction between the solar wind, the geomagnetic dynamo and the solar-system-wide heliomagnetic field, the massive magnetic field of the Sun itself that twists itself to ribbons near the star itself but rushes, at Solar Max, to the Kuiper Belt and beyond, until the Inverse-Square Law, present strengths of the massive influence's fields lines encounter the mostly unknown vagaries, in turn, of the galaxy's magnetic field and the Heliopause, where the Pioneers and Voyagers of the 1970's and 1980's steadily make their way out and away from the Solar System itself.
One hundred times closer to our apparently solitary Main Sequence Yellow Dwarf (and somewhat variable Home Star (visible to the naked eye only some short 50 light years away) Earth's very dynamic and apparenly dynamo-driven planetary magnetic field is unique among the rocky planets of the Inner Solar System, driven directly by the rotation of Earth's molten iron core, incongruent with the rotation of the Earth at large.

Because the berycenter of the Earth-Moon system (the center of mass around which both Earth and Moon rotate) is situated well beneath Earth's thin outer crust but well away from the center of the Earth, and some propose the same tidal forces in Earth's oceans known to be caused by the Moon similary plays an inexorable part in maintaining the defferential angular momentum of Earth's core with crust, actually producing the force that drived the motion of these fluids and generatign geomagnetism, as well. Though this is unlikely.

Still others suggest the Moon plays some role in plate tectonics, in keeping the core from cooling, hardening and ending the atypical long-life of Earth's central dynamo, beyond the heat produced by the steady decay of radioactive elements. Upon this geomagnetic field depends all life on land.
Regardless of this fanciful, fundamentally conjecture, this newly discovered breech may have resulted by as much as a ten percent weakening of Earth magnetic field, most notably under the South Atlantic over the last 400 years.

Of course, Earth's magnetic field has "flipped" continuously reversing its polarity many thousands of times in the past four million years.

The Sun's overall Heliomagnetic field is characteristically weaked, at the moment, in coordination with a the present and mostly continued ebb in overall solar activity. (Also, as a result, the steady infall of Galactic Cosmic Rays, some the heaviest and highest known, has inversely increased from 40 to 50 percent from Solar Maximum, since the refraction of such dangerous energetic particals is as importand to the long-term survival of terrestrial life is accomplished by the Sun's vast magnetic field.)
Whether the barely understood, complex dynamics of what fuels Earth's vital geomagnetism is related also to weaker than normal solar activity and, most importantly, the health of the Earth's convection of Earth's deep mantle, this latest discovery is bound to cause some premature alarm, and the continuous anxious hope that this situation may begin to change before Solar Cycle 24 advances finallyback to Solar Maximum, once again, some years from now.
Be assured, however, that none of this has anything to do with beliefs in Anthrologenic Global Warming, unless an increase in the infall of Galactic Cosmic Rays is, as still others have suggested, and with a straight fact, thers suggest, directly related to the availability of aerosols and dust for surficial condensate to create an increase in low cloud cover. The result would be an increase in Earth's albedo and an drop in average Earth surface temperatures.
Maybe.