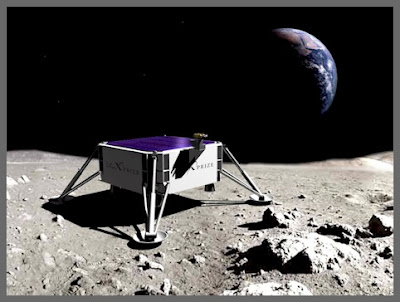 MOUNTAIN VIEW, December 17 - Next Giant Leap, a small company that was fourth to qualifyto compete for the Google Lunar X-Prize publically announced its name and team members at NASA Ames Research Center.
Next Giant Leap boasts "highly qualified members from the academic, aerospace and small business communities," and was, according to press reports, "founded on the concept that a small but focused team is the ideal vehicle to efficiently engineer the winning Google Lunar X Prize entry.
Michael Joyce founded the team November 2007, which until until today was known only as "the "Mystery Team."
"Our first year was well spent, recruiting the best possible team members and building the strong working relationships required to reach our goals," said Joyce. "With the world class team we have assembled we are ready to take the next giant leap forward required to win the Google X Prize and establish ourselves as commercial lunar services company."
"We've reveled in the additional excitement that has centered around our 'Mystery Team' and are thrilled to have them finally reveal their true identities," said Dr. Peter H. Diamandis, Chairman / CEO of the X Prize Foundation. "We are delighted to have them go public as we believe they will be a strong contender with experienced participants, a strong academic partner and several innovative, small space companies."
The lead systems integrator for NGL is MicroSat Systems, Inc., known for its innovation in small spacecraft. On May 7, 2008, MicroSat Systems was awarded a contract to build 18 Orbcomm Inc. satellites with an option for 30 more. In charge of the difficult task of landing safely on the Moon is the Draper Laboratory. Draper has been involved in space guidance navigation and control since the earliest days of the space program supporting Apollo, the Space Shuttle and the International Space Station. The Department of Aeronautics and Astronautics at Massachusetts Institute of Technology (MIT), the leading engineering institution in the United States, is a key academic partner. The MIT team includes five time Shuttle astronaut Jeff Hoffman and Professor David Miller, head of MIT's Space Systems Laboratory and developer of the innovative SPHERES (Synchronized Position Hold Engage and Reorient Experimental Satellites) payload on the International Space Station.
"When approached to join the Next Giant Leap team, we thought it was an outstanding opportunity for our students to be exposed to several agile, cutting-edge companies in the space business while working on a very challenging project," said MIT professor Jeff Hoffman. "We feel that this team has the right stuff to have a shot at capturing this very challenging prize."
Other innovative small companies that are partners on the team include Aurora Flight Sciences, a company that operates on the frontiers of flight with specialties in unmanned aerial vehicles and manned space hardware, and Busek Co. Inc., a company that specializes in advanced space propulsion, especially electrical propulsion systems.
"It's an exciting time to see companies in the private sector working to develop a vehicle that will land on the lunar surface," said NASA Ames Research Center Director S. Pete Worden. "These competitions bring new and innovative ideas that everyone in the space community can benefit from and that's a win-win for everybody."
Read more HERE.
Posted by Joel Raupe at 8:27 PM