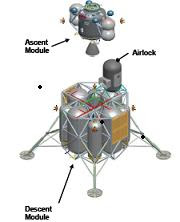 NASA has formally requested comment from its vendors on the basic design of the proposed Altair lander, advertised as the first planetary lander for the Constellation program underdevelopment, the successor to the Space Shuttle program.
Because the actual concepts of testing very long duration manned spaceflight, transfers and manned landings on Mars, for example, have yet to be tested nor designed, Altair is really a lunar lander, and the successor to the Apollo Lunar Module.
Accorting to the Huntsville Times: "NASA released a draft request for proposals, or RFP, Tuesday to seek industry support for the design of its Altair lunar lander vehicle, part of NASA's Constellation Program. The space agency intends to use the Altair lander as a lander and a habitat, with astronauts living and working on the moon for several weeks."
Marshall Space Flight Center is part of the Altair lander development team and will develop the lander's descent rocket motor. Altair Conceptual Design Contract will define operational concepts, support requirements reviews, and refine design concepts for the Altair vehicle. A draft of the final version of the RFP, expected in late January.
A conference will gather in Houston, Thursday, to share information sharing about the Altair conceptual design contract. For a copy of the draft RFP, and for more information about the conference, visit: HERE.
Posted by Joel Raupe at 12:26 PM