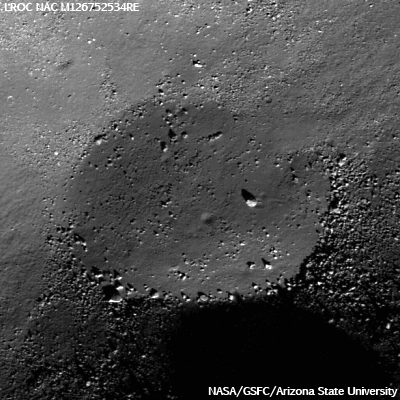 The floor of an unnamed 1.2-km-diameter crater in the Mare Frigoris Constellation Region of Interest. Samples of material in and around this 'excavation' could help us understand the complex geologic history of this part of the Moon. See the full-sized LROC Featured Image HERE. (LROC NAC M126752534RE; scene width is ~500 meters [NASA/GSFC/Arizona State University].
Brett Denevi
LROC News System 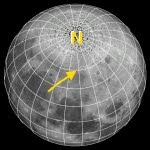 Samples from small, relatively fresh craters like the one above may someday help us learn more about Mare Frigoris and its place in lunar geologic history. Mare Frigoris is located on the lunar nearside, to the north of the Imbrium and Serenitatis basins. Instead of being low in reflectance like typical mare basalts, its reflectance is intermediate between the mare to the south and highlands terrain to the north. This is likely due to a lower iron and titanium content than any of the sampled mare basalts, making it an intriguing end-member in the spectrum of lunar mare volcanism. 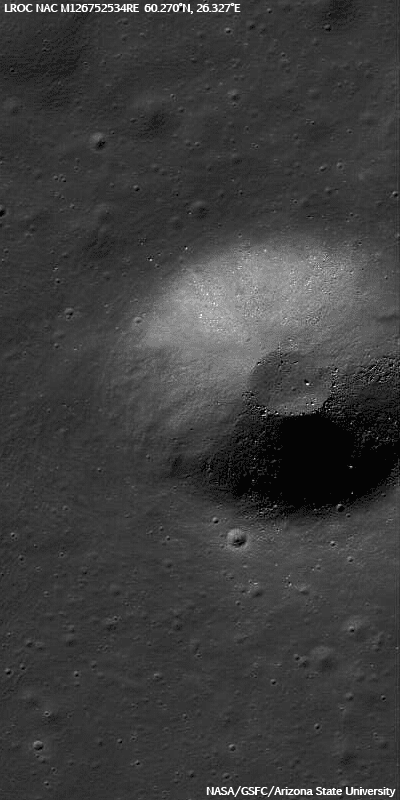 Zooming out to an approximate field width of 7 km, the subject crater appears quite typical on the main population line of lunar crater morphology, just large enough to have a flat floor. The proof is in the elemental analysis, however. The low titanium signature contrasts with the landing site of Apollo 11, for example, where titanium oxide is common.
Portions of Mare Frigoris, like the area near the Constellation region of interest outlined below, are so high in reflectance they're considered "light plains." Light plains can form in several different ways: through volcanism, with a composition even lower in iron and titanium; as the result of impact basin ejecta, which acts as a fluid, filling in topographic lows; or as ancient volcanic plains that were subsequently covered with a thin layer of highlands material ejected from nearby craters or basins which masks the true basaltic surface (a hidden, or "cryptomare"). 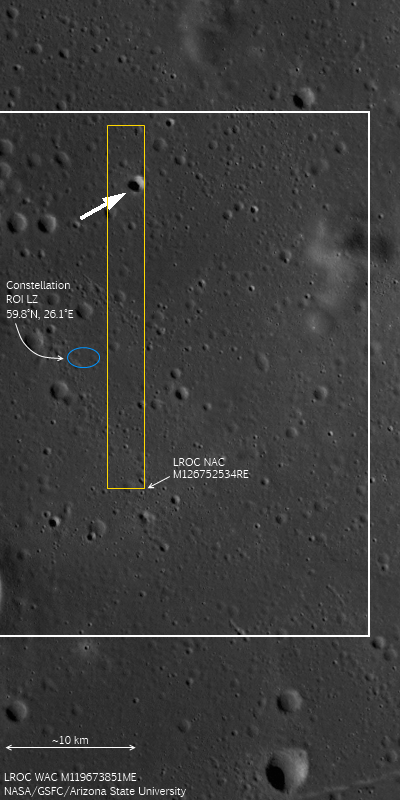 For more information on LROC's observation campaign for the Constellation program regions of interest read this Lunar and Planetary Science Conference abstract, and visit the LRO Science Targeting Meeting website (look for summary sheets for each of the fifty Constellation Regions of Interest, Tier 1, Tier 2).

Small craters like the one in the LROC Featured Image up above are excavations where material from below the surface has been brought up to the rim. Sampling can help discern whether or not the material there is distinct in composition (as would be expected for cryptomare). Sampling this material would also provide a definitive resolution to the geologic history of this fascinating region. 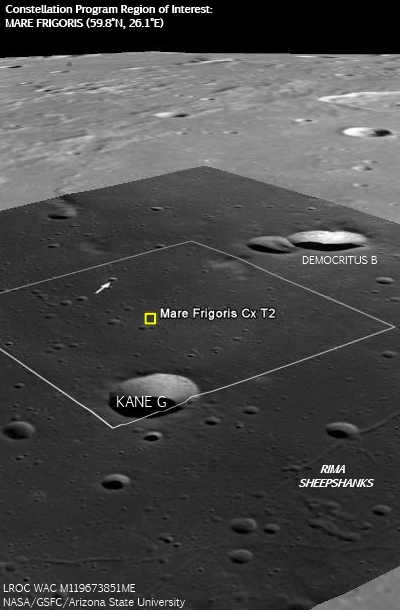 A WAC image showing the 40x40 km box centered on the Frigoris region of interest. Arrow indicates the location of the NAC image above. Image number M119673851ME [NASA/GSFC/Arizona State University].