Ahead of Part 2 of our discussion begun last Tuesday of the Descartes Formation we've stumbled on more than a few images of lunar swirls, not all immediately useful. Among them is a rare semi-processed LROC wide-angle camera views covering a wide swath on the Moon's far side. In Mare Ingenii (33.7°S, 163.5°E) are the most unmistakable swirl phenomena on the Moon. Among the material of "low optical maturity" here on the surface is the "butterfly swirl," nested inside the influence of a local crustal magnetic field. By inference this magnetic anomaly is associated with a basin-forming impact that created Mare Imbrium on the direct opposite side of the Moon, >3.8 billion years ago [LROC WAC M103439292MC-NASA/GSFC/Arizona State University]. 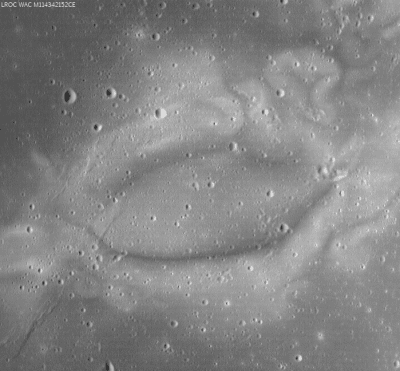 The heart of Reiner Gamma (7.4°N, 300.9°E), the most conspicuous and studied swirl on the Moon's near side. While in Part 2 of the Descartes discussion our interest is in topographic and some extreme close-up LRO narrow-angle camera views of this otherwise well-photographed phenomenon, the WAC view above, along with others, provide their own distinct, beautiful value. If there was an impact on the direct opposite side, or antipodal, to the magnetism associated with Reiner Gamma it has yet to be clearly identified. Instead this very long swirl and its warp and woof of magnetic field lines in Oceanus Procellarum appears related to the volcanism centered on the Marius Hills. Because Reiner Gamma might be the largest and longest swirl on the Moon's near side, you might think it's local magnetic field is the strongest, also. That's not the case, however. That distinction belongs elsewhere, where a well-mapped landmark was only discovered to be a true albedo swirl only recently (and decades after Apollo 16 visited nearby) [NASA/GSFC/Arizona State University].
Posted by Joel Raupe at 4:03 PM