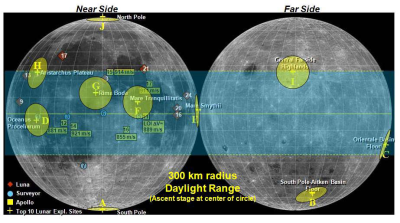 Astronauts in rovers explore out to 300 km during daylight

With 1 rover, 2 astronauts and 3 days, the Apollo 17 Mission covered over 30 km, setup 10 scientific experiments and returned 110 kg of samples. This is a lot of science in a short time and the inspiration for a barebones, return-to-the-Moon strategy called Daylight Exploration.

Most science sites are within an equatorial band of 26 degrees latitude and on the Moon, at the equator, the day is 14 Earth days long; even more important, the lunar night is 14 days long. Human missions are constrained to 12 days because the energy storage systems required to operate during the lunar night adds mass, complexity and cost.

In addition, short missions are beneficial because they require fewer consumables, do not require an airlock, reduce radiation exposure, minimize the dwell-time for the ascent and orbiting propulsion systems and allow a low-mass, campout accommodations. Key to Daylight Exploration is the use of piloted rovers used as tele-operated science platforms. Rovers are launched before or with the crew, and continue to operate between crew visits analyzing and collecting samples during the lunar daylight.
Download the study in Adobe Reader format, HERE.
Earth and Space 2010
Honolulu, March 14-17. 2010
Posted by Joel Raupe at 11:59 PM