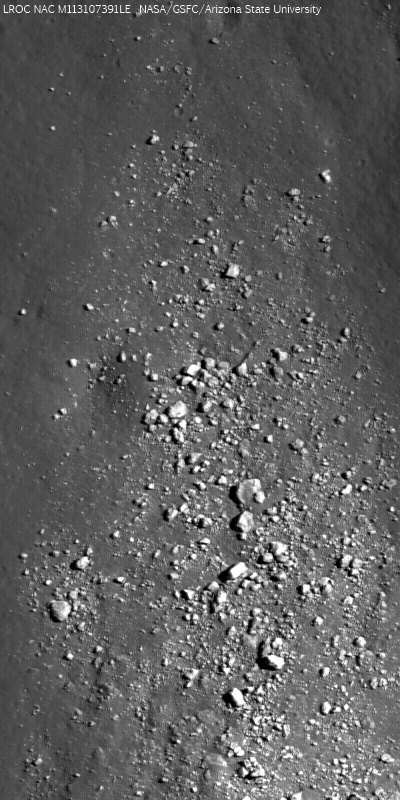 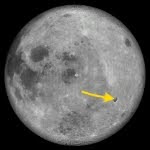 Tsiolkovskiy Crater is 185 kilometers (115 miles) wide and located on the far side of the Moon. It's named after Russian scientist and visionary space pioneer Konstantin Tsiolkovskiy.
"The earth," Tsiolkovskiy wrote, "is the cradle of the mind. But one cannot live forever in a cradle."

The crater has a complex central peak, a smooth lava-flooded floor, a lunar lobate scarp located on the ejecta blanket near the crater rim and several other interesting geomorphological landforms and features that make Tsiolkovskiy an exciting destination for future human lunar exploration. 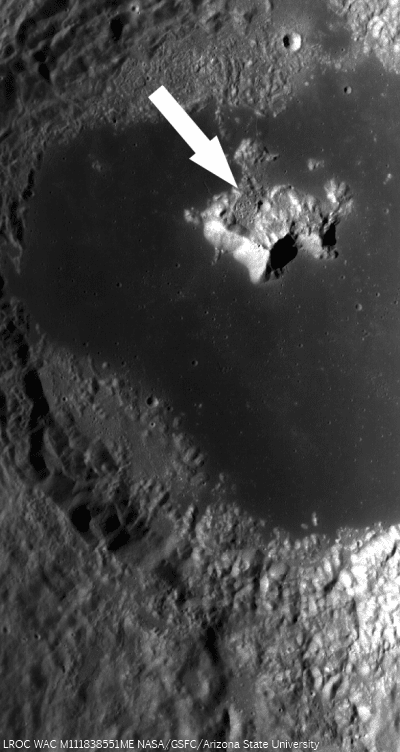 LROC Wide Angle Camera context image showing Tsiolkovskiy crater and the surrounding lunar highlands. The approximate position of LROC's Featured Image is shown by the white arrow [NASA/GSFC/Arizona State University].
Tsiolkovskiy's floor is covered with relatively smooth mare basalt that formed from pooling basalt that was erupted after the crater formed. The central peak, a large mountain near the center of the crater, is composed of material from beneath the crater floor that rebounded upward after being compressed during the impact event. Also visible are many boulders or pieces of the uplifted central peak that have broken off and accumulated on the crater floor. The relationship between some of the boulders and the mare basalt flows is complex. In some areas it appears that boulders are surrounded and partially covered by the basalt lava indicating that the lava formed more recently than the boulders. In others, the boulders look like they rest on top of the dark lava flows.

The biggest boulders in this view are up to ~25 m (over 80 feet) in length! This is roughly the length of a college basketball court or two school buses lined up lengthwise. In areas such as this, astronauts are able to easily collect and study rocks from the smooth mare crater floor as well as rocks that originated from beneath the lunar surface! You can also see on the floor of the crater multiple smaller craters that formed over time as small asteroids and comets impacted the Moon. Scientists can use counts and measurements of superposed craters to estimate when Tsiolkovskiy Crater formed - the more craters, the older the surface on which they lie.

For more information on LROC's observation campaign for the Constellation program Regions of Interest read this Lunar and Planetary Science Conference abstract, and visit the LRO Science Targeting Meeting website (look for the baseball card summary sheets for each site: part 1, part 2).

Explore the Tsiolkovskiy Constellation region of interest for yourself! 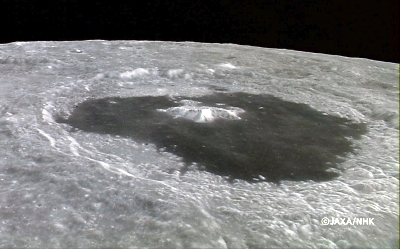 HDTV still image of Tsiolkovskiy from Japan's lunar orbiter SELENE-1 (Kaguya, 2007-2009). The Naval Research Laboratory, Massachusetts Institute of Technology and NASA have teamed up to design and deploy a radio telescope array on the floor of the far side crater, hoping to use the radio quiet of the side of the Moon blocked from the interferences of Earth and her billions to probe the cosmological "Dark Ages," a poorly understood time between the primeval fireball of the Big Bang and the formation of earliest galaxies [JAXA/NHK/SELENE].
Posted by Joel Raupe at 5:04 AM