The Launch & Commissioning of the Lunar Reconnaissance Orbiter 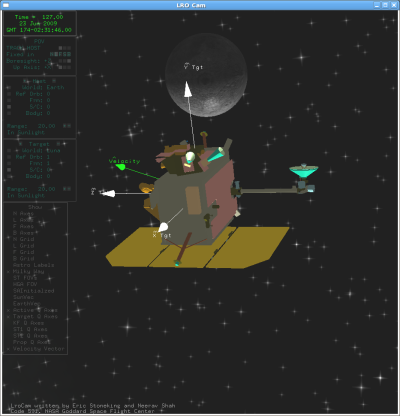 To date, the Guidance, Navigation and Control (GN&C) subsystem has operated nominally and met all requirements. However, during the early phase of the mission, the GN&C Team encountered some anomalies. These events offered invaluable insight to better understand the performance of the system. Following an overview of the GN&C subsystem will be a mission timeline and interesting flight performance and accounts of the anomalies encountered by the GN&C Team, discussed in chronological order.
INTRODUCTION

NASA's LRO was launched on June 18, 2009 from the Cape Canaveral Air Force Station, aboard an Atlas V and into a direct insertion trajectory to the Moon 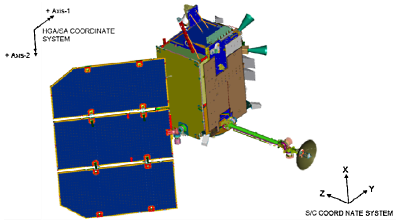 Schematic of an inflight attitude profile of LRO.
Designed, built, and operated by NASA GSFC, the half-billion dollar LRO, delivered on time and below budget, is presently gathering crucial data on the lunar environment in preparation for long-duration lunar expeditions.

From launch and early cruise operations through commissioning and into its one year mission, LRO has performed very well, with all subsystems operating well within the bounds of design requirements, collecting excellent science data. An early mission highlight was the release of images taken by the LRO Camera (LROC) Narrow Angle Camera (NAC) of Apollo and Luna landing sites, showing detailed images of landing hardware and the faint but unmistakable footprints left by United States astronauts.

This paper begins with an overview of the GN&C subsystem and a discussion of the LRO mission timeline. An early mission chronological narrative follows, describing GN&C subsystem performance and interesting GN&C events (including some unexpected safe mode entries) that occurred over a period from separation to cruise to lunar orbit insertion and the spacecraft commissioning phase.
Read the full Adobe Reader file, HERE.
(Preprint) AAS 10-085
Posted by Joel Raupe at 2:04 PM