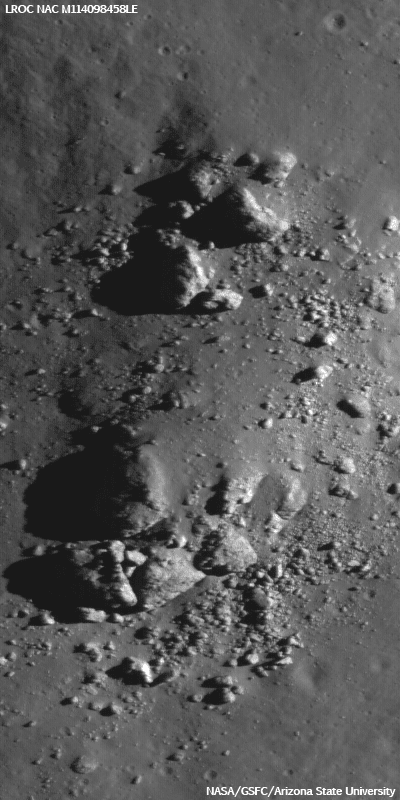 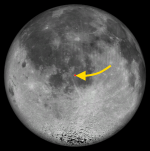 Nearly every square inch of the Moon is affected by impact craters, from micron-sized pits to gargantuan impact basins (like the 1100 km diameter Imbrium basin, which you can see with your naked eyes on a clear night).

Lunar craters have a dizzying array of sizes and morphologies; this is because the size and the morphology of a crater depends on the size (and to some extent, the speed) of the impacting bolide. While there are no places on the lunar surface that aren't interesting or worthy of a visit from human explorers, a recurring theme that you'll see on the list of Constellation program Regions of Interest are complex craters - large craters with a central peak. 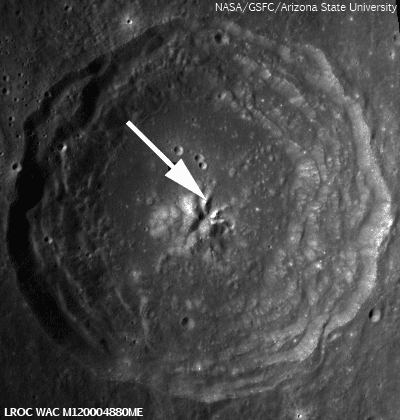 LROC Wide Angle Camera View of 60 km-wide Bullialdus. The approximate position of today's LROC Narrow-Angle Camera Featured Image is highlighted with the white arrow [NASA/GSFC/Arizona State University].
Sending astronauts to visit complex craters is fundamental to our understanding the Moon. The reason is simple: the Moon is the best preserved and most accessible laboratory for understanding impact processes. Impacts are the most fundamental and important geologic process in the Solar System. On the Earth, which has been hit by impactors for over four billion years, erosion caused by wind and precipitation degrades impact craters, making them (relatively) hard to study. On the Moon, though, these craters are relatively well preserved.

Complex craters are of particular interest. Complex craters have a well defined central peak and often a terraced rim; this central peak is brought up from great depths beneath the crater as the ground elastically rebounds after the shock and pressure of the bolide impact. These sorts of impacts happened on Earth, too - but the erosion caused by terrestrial weather removes all traces of their presence. On the Moon, though, complex impact structures are well-preserved, and the central peaks - which have brought up materials from great depth - offer us the easiest way to explore the composition of the Moon's lower crust and upper mantle, providing critical insights for planetary scientists trying to figure out how planets in this Solar System (and others, around other stars) form.

Today's featured image shows the summit of the central peak of Bullialdus crater, a Constellation program region of interest located in the western part of Mare Nubium. Spectroscopic observations of Bullialdus using terrestrial telescopes showed that Bullialdus is compositionally distinct from the surrounding region. Later studies using Clementine multi-spectral data indicated that there are several rock types exposed on the floor of the crater. Lunar scientists who have studied Bullialdus proposed that the impact excavated mafic materials from great depth.

Lunar scientists need to discover what these mafic materials are - are they some type of exotic mare basalts? Rare highlands non-mare volcanic rocks? We don't know, and we must find out to fully understand the Moon.

The central peak of Bullialdus is about a kilometer high. Astronaut explorers will not only have to explore around the base, but probably also scale this small mountain to collect the diverse array of samples required to really answer this question.

Plan your own adventure in Bullialdus crater.
Posted by Joel Raupe at 1:56 AM