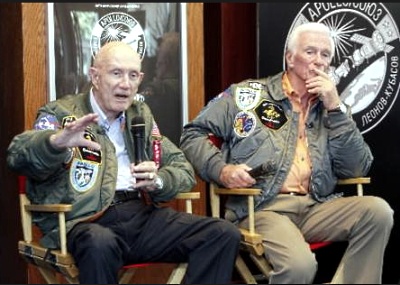 Lt. Gen. Thomas P. Stafford, (USAF, Ret.) (left) joins Captain Eugene A, Cernan (USN, Ret.) participate in a panel discussion at B.C. Clarks Jewelry store at Penn Square Mall in Oklahoma City, Thursday. Stafford and Cernan flew together on two missions, Gemini 9 and to within 9 kilometers of the lunar surface on Apollo 10. Cernan was the last person to walk on the Moon, in command of Apollo 17 and Stafford flew in command of the first U.S. Soviet rendezvous in space, Apollo-Soyuz, in 1975. The veteran astronauts talked about their missions and answered some questions from the public [The Oklahoman/Paul Hellstern].
David Izzo
NewsOK/The Oklahoman

Just before Tom Stafford and Gene Cernan lifted off for their Gemini 9 space mission in 1966, the flight crew director called Stafford aside. "We can't afford to have a dead astronaut floating around in a space suit,” he told Stafford.

"I wasn't in on that conversation,” Cernan said.

Stafford recalled that director Deke Slayton told him that if Cernan died while on a risky spacewalk that was part of Gemini 9, Stafford should haul the body back into the capsule.

Stafford, the mission commander, listed the many perils of that strategy.
Read more HERE.
Posted by Joel Raupe at 1:10 AM