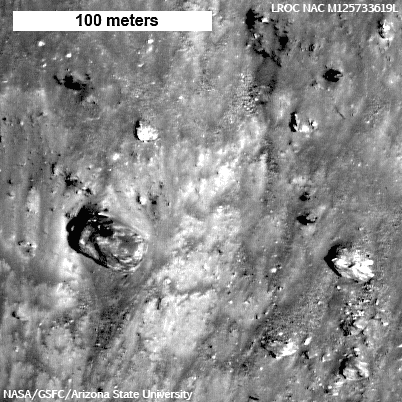 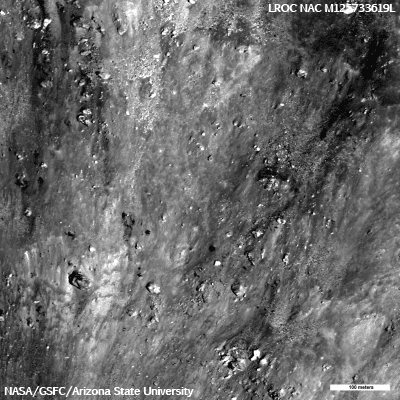 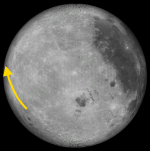 LROC News System - Outside of the protective veil of the Earth's atmosphere, the Solar System is a dynamic, constantly changing environment. Nowhere is this more true than on the lunar surface. Asteroids and comets slam into the Moon at speeds greater than 16 km (10 miles) creating impact craters in a matter of seconds. So much energy is released in these impacts that the impactor is mostly vaporized and some of the target rock is melted. Rocks and soil are thrown out and form spectacular ejecta aprons.

Rocks excavated from the deepest part of the crater typically land very near the rim, and material from the original surface is thrown out towards the edge of the ejecta blanket. Astronauts can easily sample the full range of depth of the crater without having to go down the steep slopes - they can simply collect samples as they approach the rim. Nature has provided a convenient look into the subsurface! 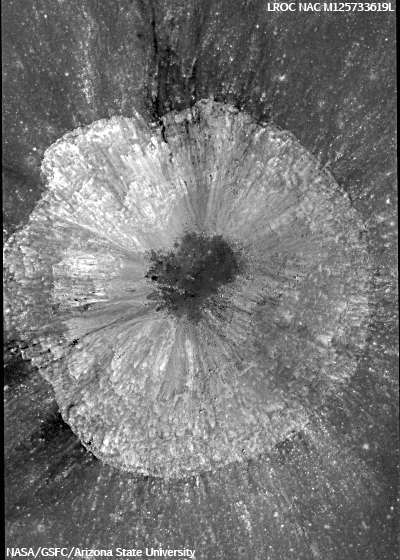 Bright and dark patterns show the distribution of ejecta of a 5 km diameter crater (8.0°N, 182.2°E), portion of LROC images M125733619L, R subsampled to 5 m/pixel [NASA/GSFC/Arizona State University].
The full resolution sub-image (top) focuses on the northeast wall (upper right) of the spectacular crater seen above. The low reflectance material is most likely impact melt that was thrown out during the impact. The streamers of impact melt (black materials) help scientists trace the path of ejecta taken during the cratering process. The floor of the crater is flat and dark: it is the remnant of impact melt that pooled in the bottom of the crater. The fact that these features are so well preserved is evidence that the crater formed recently in geologic terms. But how recent is recent? Over time smaller impacts will degrade these exquisite details and slowly this crater will fade into the background. Without samples, the only way we have of estimating ages of young craters is by counting the number of even smaller craters that have formed on their surfaces.

The best way to date impact craters is to sample their impact melt - as the molten rock cooled and formed new minerals their radiometric clock was reset. Scientists can measure the ratio of parent atoms to their daughter products and very accurately determine the age of crystallization. Planetary scientists would very much like to obtain accurate age dates for many of these young craters to determine the rate of recent impacts on the Moon. Current impact rates determined for the Moon are applicable to the Earth!
Sometimes it's easy to lose a sense of scale when looking at high resolution images of the Moon - the diameter of this crater (5 km) is about the same as the distance from the steps of the Lincoln Memorial to the U.S. Capitol. The solidified lake of impact melt in the bottom of the crater is 1200 meters (3937 ft) across! Meteor Crater (near Winslow, Arizona) is about the same size as this floor deposit. 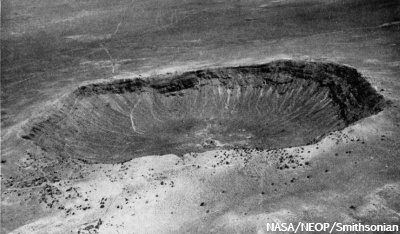 Aerial view of Meteor Crater, Arizona (Smithsonian, 1928) [NASA/Near Earth Object Program/Images of Meteor Crater].
Studies of young impact craters by future astronaut explorers will provide key insights into a host of scientific questions, most especially about the timing of recent impacts in the Solar System and the nature of the cratering process here on Earth.

Explore this fascinating crater on your own.
Posted by Joel Raupe at 1:17 PM