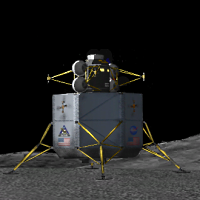 Until national space policy is amended by Congress, perhaps with a budget for the next fiscal year which begins October 1, previously approved and funded work on the Constellation program will continue. While the administration has announced plans that include ending Constellation and terminating work underway for manned lunar exploration, Congress will ultimately determine the future of national space policy.

Leaders for Democrat Party majorities in both the U.S. House and Senate have no plans to begin work on next year's budget until after congressional elections on November 2.

Because the current fiscal year ends a month earlier, temporary spending plans will most likely be approved to bridge gaps in comprehensive budget authority. A "lame duck" Congress, after November's election, with it's present membership intact and still in session between the election and the inauguration of the next Congress in January, might be unable to agree on spending authority and priorities for all or part of the federal government.

Even if, after the election, the present Congress is able to agree on a FY 2011 spending plan, adjustments and even complete reversals of its best laid plans might be implemented almost immediately after the next Congress is seated in January. These scenarios are especially more likely if the make-up of the next Congress is dramatically different, having been changed by the voters in November.

Obviously, putting a permanent axe to Constellation and present work underway to return humans to the Moon (including the "Armstrong National Laboratory" as the American part of a permanent international station at the lunar south pole) would be harder for a new Congress to reverse if this work that is still in progress is terminated sooner rather than later.

All of which might explain why Senator Russ Feingold (D-Wisconsin) is seeking to short circuit any return to the Moon by quietly amending unrelated legislation. Proponents of Constellation are also running committee amendments to unrelated legislation in hopes of reiterating the present national space policy.

For more, Mark Whittington of Associated Content has more details, along with further speculation about Senator Feingold's motivations for amending Senate Bill 3356, HERE.
Posted by Joel Raupe at 3:03 AM