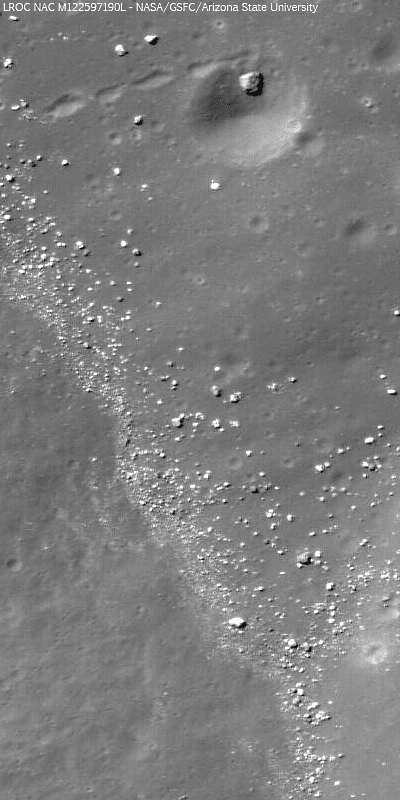 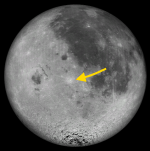 Golf-enthusiasts might look at today's image and say, "Wow, that boulder sure looks like a hole in one!" Boulders like this are incredible because we can determine where the boulder came from by back-tracking along the boulder trail. In fact, Apollo 17 Astronauts Schmitt & Cernan sampled a large boulder at Station 6, and because scientists were able to trace the original position of this boulder using its boulder trail, we can infer what the composition of the rocks up-slope may be.
In this case, the boulder trail curves abruptly as the boulder approached its final resting place. What might have caused this boulder to deviate from its straight, downward course? You can see the boulder trail intersects a crater rim as the local slope was flattening out. As the boulder was slowing, it encountered a new steep slope on its right, thus turning it into the crater.

Boulders fall from high elevations to lower ones because of gravity after being knocked loose by small impacts or moonquakes. Changes in slope can stop boulders; when a steep slope (like that of a crater wall) suddenly shallows, the boulder may not have enough inertia to continue moving. Inertia, or Newton's First Law of Motion, describes an object's resistance to change in velocity. So, a boulder will continue to move until something changes its speed or direction. 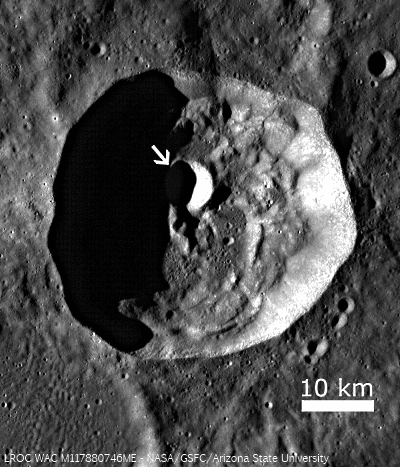