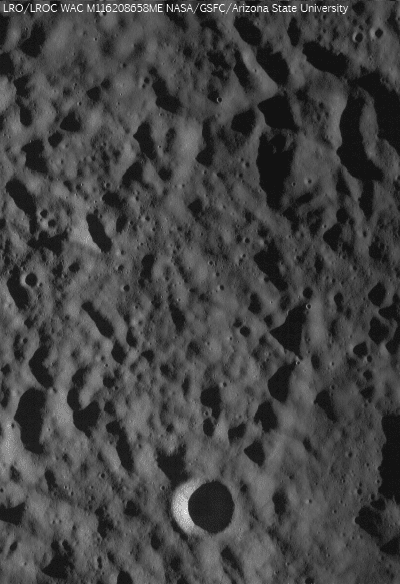 Though its distinctive patch of bright albedo is not apparent at this scale or wavelength, this is the heart of the intriguing Descartes Formation (10.6°S, 16.3°E) from an altitude of 46.71 km as resolved by the Wide-Angle Camera (LROC WAC) on the Lunar Reconnaissance Orbiter during its 2,259th orbit, December 23. North is up and the Sun is less than 10 degrees above the east-northeastern horizon at right, not much different than conditions as they were when Apollo 16 landed only 54 km to the northwest in 1972. The 4 km crater at bottom center is Descartes C, conspicuous on the battered rim of far more ancient 34 km-wide Descartes, mostly beyond view at below left. And directly to the west of Descartes C is the apparent center of a locally intense crustal magnetism, the most intense yet identified on the Moon's near side. [NASA/GSFC/Arizona State University]. 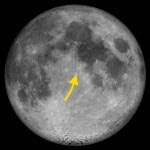 Life on Earth thrives within a generous magnetic shield, most likely induced by uneven rotation of molten conductive material deep within our planet. Earth is mostly hot viscous liquid while planetary scientists are increasingly confident the Moon is solid down to the bone, though its density is far from uniform. The Moon has little or no global magnetic field, though like poor stitching pulled loose in loops from its fabric, here and there the Moon does feature quite a few widely-placed magnetic anomalies.

The Most conspicuous of these are on the Far Side below the equator, directly on the opposite (or "antipodal") side of the Moon from the Near Side's more familiar impact basins. At the antipodes of Mare Imbrium for example, there are notable magnetic fields within Mare Ingenii (33.7°S, 163.5°E) tenuously joined with field lines in Van de Graaff nearby. This area also corresponds with bright surface albedo patches of a characteristic pattern, some of the Moon's more elegant "swirls." 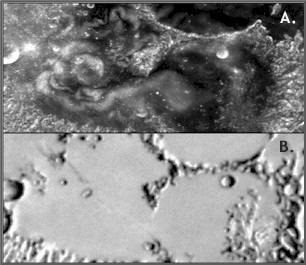 Not the best picture we've featured of the Ingenii swirl field, but it illustrates a point in comparing two similar representations of different data gathered over Mare Ingenii (33.7°S, 163.5°E). In a far side whole-hemisphere optical mosaic (A.) from Clementine (1994) these swirls, antipodal to Mare Imbrium, contrast nicely with a darker, more "optically mature" background, bringing detail forward. In an admittedly broad-resolution laser altimetry map from the same mission (B.) the phenomena are not detected. Even though more recent laser altimetry indicates there may, in fact, be a very shallow topographic component to the swirls here it's little more than a few meters high and very spread out. [NASA/DOD/USGS].

Most of swirls on the Moon consist of a darker band dividing two brighter lanes that are essentially mirror images of one another, collections of surface material considered "optically immature." That is to say these brighter halves seem to have impossibly resisted a relentless solar wind, and every other kind of space weathering, long after they should have darkened, or more properly "reddened," with or without a magnetic field shielding the area from sunburn. Truly fresh lunar surface material has a maximum "immaturity" of 900 million years.

Additionally the immediate lunar surface at the boot print and tire tread scale is periodically "gardened" by micrometeor bombardment every 2 million years or so. 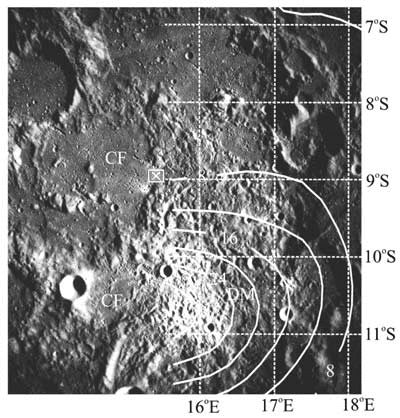 Figure 2 from "Correlation of a strong lunar magnetic anomaly with a high-albedo region of the Descartes mountains," by Richmond, Hood & Halekas, et.al. (GFL, V. 30, # 7, 2003) "Contour map of the two-dimensionally filtered magnetic field magnitude (in nano-Teslas, or nT) at an altitude of (18.6) km in the vicinity of the Apollo 16 landing site (boxed cross). The photograph is a portion of Apollo 16 mapping camera frame 0161 (AS16-M-0161). Several exposures of the Cayley formation (CF) and the adjacent Descartes mountains (DM) are indicated" [Lunar Prospector Magnetometer data, 1999].
The event (or events) that formed Mare Imbrium, the largest feature easily identified with the naked eye from Earth, is dated at ~3.8 billion years. How then do apparently "shock-fossilized" magnetic fields at the antipodes of a basin-forming impact last? Were they originally much stronger?

If these locally intense magnetic fields protect some surfaces within their small realms from darkening how does this phenomena persist more than a billion years, let alone four times that span?

An emerging theory suggests a more dynamic process, perhaps one that brings the Moon's dynamic, dusty exosphere into the mix, the daily levitating of ionized sub-micron-sized lunar dust out from and away from within the small magnetic influences in these areas while conversely repelling a net amount of fallout from this same source after the polarity of these small particles has flipped.

Whether lunar swirls are a bi-product of the lunar exosphere combined with an interaction with fossilized crustal magnetism is the answer, or if, as some have suggested, these patterns are cometary in origin, and even if these fields possess capabilities that defy solar reddening over a longer period than we yet comprehend, they are definitely starkly beautiful. No two are exactly alike.

As with so much else we are still learning about the Moon, there's also some interesting differences between swirls on the near side and those on the far side.

The strongest of the Moon's magnetic anomalies presently known is Crises Antipodes (CA) near Gerasimovich (22.9°S, 237.4°E) opposite from Mare Crisium. There are swirl markings there also, though these are harder to immediately pick out from the bright highland anorthosite.

First observed by Jasper Halekas and his colleagues at the Space Science Laboratory, recently confirmed with magnetometers on India's Chandraayan-1, there is a true "mini-magnetosphere" over Gerasimovich shown intense enough to cavitate the solar wind just as Earth's magnetosphere plows the solar wind like a rock in a fast-moving stream.

The most famous and studied of the Moon's swirls is Reiner Gamma, a lengthy and meandering bifurcated albedo patch a few degrees above the equator and two-thirds of the way from the Near Side's central meridian to the western limb, in Oceanus Procellarum. As yet, there is no mapped or buried impact on the opposite side of the Moon identified with Reiner Gamma. It may be the extensive magnetic field there is related to a buried metallic flow as evidenced by its origin within the Marius Hills.

Add to the atypical nature of Near Side swirls the amorphous patch of bright coloring overlaying the Descartes mountains. The strongest Near Side swirl is a very undramatic, indistinctive splash of brightness in an area barely 60 km by 40km.

In Part 2, "Crossroads of two impacts" or "Serendipity and Apollo 16" 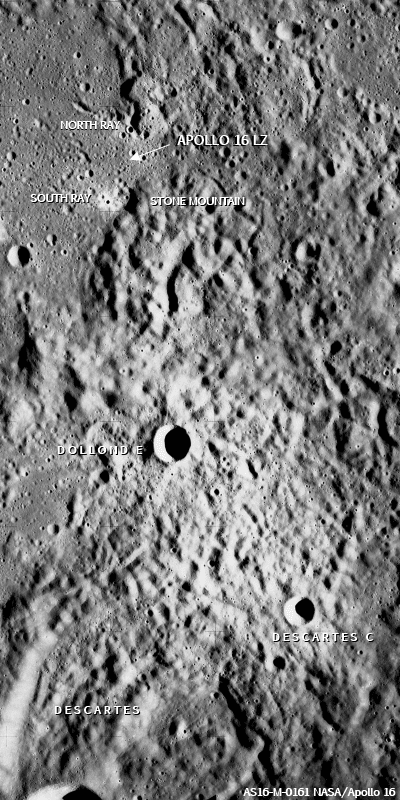 The splash of relatively bright material over the low hummocky hills of the Descartes formation is easy to spot with a modest telescope, when the sun is high over the area, before and after a Full Moon. At sunrise, the relief of long shadows brings the very unusual cross-hatching of the low, bubble-like ridges becomes apparent. In orbit, the Apollo 16 mapping camera was able to captured both features, even as its landing party explored the area between North and South Ray craters, just off the northern tip of the formation at upper left. Though Apollo 16 detected the strongest indication of a magnetic field at any of the six manned landing sites, and a concentration of iron and titanium oxides corresponding to the albedo patch were imaged by the Clementine orbiter (1994), the "lunar magnetic anomaly" in the region was not mapped until Lunar Prospector orbited very low over the area near the end of it's mission in 1999 [NASA/AS16-M-0161].
Posted by Joel Raupe at 1:01 PM