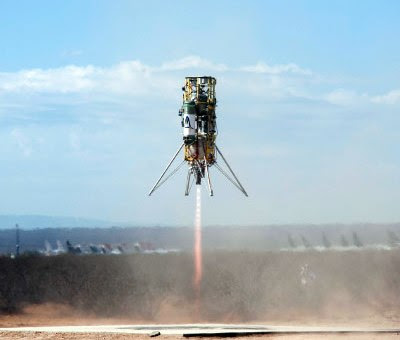 Two California companies, one a rocket engine builder and the other a mock moon lander champion, have teamed up to develop new private unmanned vehicles that NASA could send to the moon, Mars and asteroids.

The companies are XCOR Aerospace, specializing in rocket engines, and Masten Space Systems — which won a $1 million NASA contest to build and fly robotic vehicles on simulated hops on the moon. The two companies hope to combine their areas of expertise in anticipation of NASA-sponsored unmanned lander projects, according a joint announcement this week.

"It seems like NASA may actually be interested in a commercial approach to landers," Michael Mealling, of Masten Space Systems, told SPACE.com Tuesday.

Read the article HERE.
Posted by Joel Raupe at 12:09 AM