Using the Earth to study the Moon 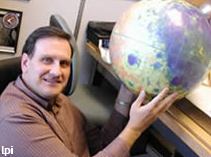 Last week, the Science Team of the Mini-RF imaging radar experiment aboard the Lunar Reconnaissance Orbiter (LRO) mission, met in Flagstaff, Arizona. We were there to conduct field studies of some interesting lunar analogs that occur in this area. Scientists study the planets through a variety of means, including images, remote-sensing, and sample return. One technique involves studying the processes and deposits of the Earth as a guide or analog to understanding similar features on the Moon and other bodies. Analogs have been studied since the beginning of the space program and have been essential to unraveling the complex histories of rocky objects in the Solar System.

The team gathered early Wednesday morning north of Flagstaff. Our field guides pictured the three areas we would spend the day visiting, along with geologically similar features found on the Moon. Our technique used airborne radar images of our targets: The SP cone and lava flow, Sunset Crater National Monument and Meteor Crater. Each site offers specific features that one can observe and walk across, using it as a guide toward understanding the same processes that have shaped our Moon. Our field trip illuminated the radar data in a “real world” environment, assisting us as we continue to explore and map with our instrument now orbiting the Moon.

The SP cone and flow is one of the most remarkable volcanic features in the region, with a beautifully symmetrical cinder cone and an extremely rough, blocky lava flow (Fig. 1; for full resolution versions of the surface pictures, click here: a, b, c). As viewed from the ground, the lava flow is blocky and extremely rough at the scale of the L-band radar wavelength (about 25 cm, or almost a foot). Steep flow fronts of blocky lava lie directly upon a smooth plateau of flat-lying sedimentary rocks. These remarkable flow fronts can be up to 50 m high (over 150 feet) and their rubbly, rugged fronts provide a spectacular contrast to the featureless plain upon which they rest. In the radar image, the lava flow is extremely bright, indicating high radar returns and its circular polarization ratio (CPR), one measure of its surface roughness at wavelength scales, is very high. 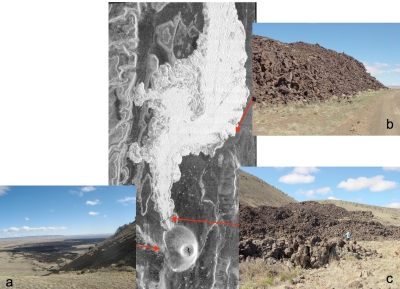 SP cone and flow, a very rough, fresh volcanic feature in northern Arizona. Radar image courtesy of L. Carter, Smithsonian Inst. (click to enlarge.)
The relations seen at the SP flow indicate the very high CPR features on the Moon could likewise represent very rough, block-rich surfaces. An example of such is the unusual flow of shock impact melt (not volcanic lava, although quite similar in terms of its physical properties) seen emanating from the far side crater Gerasimovich D (22°S, 122°W, 26 km diameter; Fig. 2). Both of these lobate flows (volcanic lava on the Earth, impact melt on the Moon) show high CPR, indicating the surface of the flow on the Moon probably has similar properties to the SP flow north of Flagstaff. One exception is that the mean block size on the Moon may be smaller, as the Mini-RF S-band radar has a shorter wavelength (12.6 cm or about 5 inches) than the longer wavelength AIRSAR L-band image (23 cm wavelength) of SP crater. 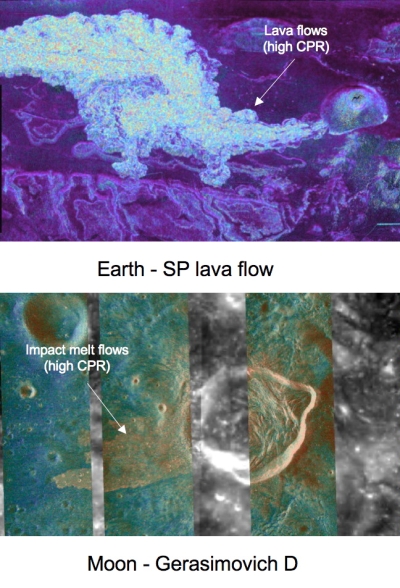 Gerasimovich D, directly on the opposite side of the Moon from Mare Crisium, is pictured showing an outflow of impact melt rock with high CPR, similar to the high CPR seen in the SP lava flow. This "Crisium Antipodes" is also site of the most intense crustal magnetism yet discovered on the Moon, sufficient to cavitate Solar Wind and to form a "mini-magnetosphere" over the area. (click to enlarge)
Fifteen miles away from the SP flow, an instructive set of geologic relations are seen at Sunset Crater National Monument (Fig. 3; for full resolution versions of the surface pictures, click here: d, e). At this feature, the extremely rough lava surface of the Bonito flow is in direct contact with smooth, ash mantled hills of the same age. This contact is shown by the sharp boundary between high CPR lava and the extremely low CPR ash-covered hills in the radar image. Such a relation is also evident on the Moon, where regional dark mantle deposits of lunar volcanic ash (such as the Sulpicius Gallus dark mantle on the rim of Mare Serenitatis) show low CPR, exactly as does its terrestrial counterpart. Once again, the Earth example allows us to better interpret our remote-sensing data for the Moon. 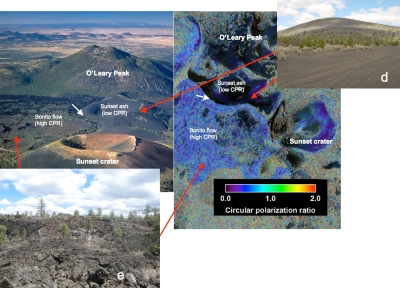 The Moon is covered with millions of impact craters and we were anxious to visit and compare the radar data of Meteor crater, the world’s first proven impact structure, with surface conditions within and near the crater rim to better understand the surface of the Moon. The rugged, blocky ejecta of rocks thrown out of the crater is evident by the radar bright halo surrounding Meteor crater (Fig. 4; for full resolution versions of the surface pictures, click here: g,h,i,j). On the ground, this is manifested by abundant boulders of rock, strewn about the outer rim of the crater. The crater interior is filled with ancient lake bed sediments. This fine-grained material results in lower radar echoes for the floor of Meteor crater than for its rocky walls and rim. Similar features are found in certain lunar craters where fine-grained material, moved downhill by gravity, partly fills the crater interiors. The afternoon’s hike down into and across the floor of Meteor crater gave all of us a better appreciation for the surface topography and conditions on the Moon. The climb back up to the rim, capped off our long day of field work. 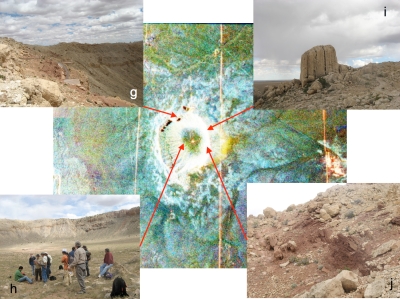 Many of the geological features seen in radar images of the Earth are also seen in the radar images from the Moon. As we continue to map the Moon with the Mini-RF radar, the sometimes puzzling relations seen in the lunar data are understood better by comparison with Earth analogs. Our entire team acquired valuable insight into how the Moon works and what the surface is like from our day in the field. For a geologist, there is simply no substitute for directly observed field data to fully comprehend the complex history and processes of the Moon.

Equally interesting and important will be the insight and knowledge gained when we sample the Moon in more detail. The Moon has been described as a “dead planet” because compared to the Earth, which has rapid, dynamic processes of erosion, the Moon remains unchanged for millions of years. However, for its ability to retain the ancient historical record of the Earth-Moon system, advantage goes to the Moon. The multi-billion year records of impact and solar wind embedded in the lunar surface awaits our recovery, and will tell us about both the past and possible future of our home planet.