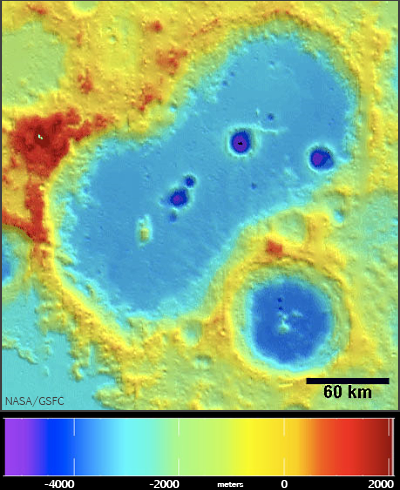 The Van de Graaff basin is a difficult feature to trace with the eye (see below). Being at the heart of the general area, along with Mare Ingenni, that is on the direct opposite side of the Moon, "antipodal" to Mare Imbrium, it seems no coincidence this wider area of the far side's southern hemisphere is therefore home to a complex "lunar magnetic anomaly." Also, as seems to be the case with all lunar magnetic anomalies, the area is rich with surficial "swirl" phenomena. And it is these bright features that fool the eye, though LOLA shows that their brightness is invisible to laser altimetry. These features are apparently little more than skin deep. They appear to defy a general rule that says space weathering should obscure and darken (more properly "redden") most fresh bright surface materials after 900 million years or so [NASA/GSFC]. 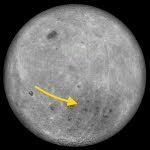 LOLA Image of the Week Van de Graaff Crater, on the lunar far side north of South Pole-Aitken (SPA) Basin (26.92°S, 172.08°E), has an unusual figure 8 shape (~240 km x 140 km) that has long caught the eye of lunar scientists. Its shape suggests that it was formed by two separate impacts even though there is no crater wall separating its two halves. LOLA data indicate that the floor of the crater is relatively flat except for the presence of several smaller impact craters. Portions of its rim reach almost 1000 m above lunar mean elevation level, while its floor is near 2100 meters below.

Van de Graaff is a Constellation program Region of Interest, a candidate for robotic and human exploration because of its location within a magnetic and geochemically anomalous region. The Moon does not have a global magnetic field like Earth, and thus the origin of its local crustal magnetic field is of scientific interest.

Van de Graaff and the surrounding region are also slightly enriched in thorium, an element found in lunar KREEP (potassium (K), rare earth elements (REE), and phosphorus (P)) terrain. Most of the Moon's KREEP-rich materials are found on the lunar near side, thus the presence of enhanced thorium in the Van de Graaff area is intriguing. 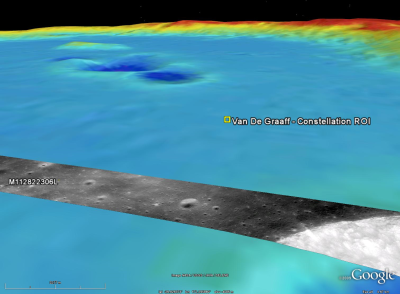 Looking west southwest from a vantage a few kilometers east of the NASA/Constellation Region of Interest (26.9°S, 172.08°E) within Van de Graaff. LROC Narrow-Angle Camera strip M112822306L (centered on 26.87°S, 172.54°E) is runs north-south through the scene, including a part of Van de Graaff C. [NASA/GSFC/Arizona State University]. Along with it's swirls and magnetic anomalies, the region is also one of extremes in elevation.The bottom of Van de Graaff C (lower right), for example, is almost 7 km below the mean global average. Astronauts landed at the Van de Graaff Constellation ROI landing zone, only 20 kilometers southwest, will be standing on a vast rolling plain roughly 4 kilometers below the global average. Rising over the western horizon the crew will easily see the highest peaks on the northwest rim of Van de Graaff, the highest here topping out at over 2 kilometers over the global mean average elevation, for an over all 8 kilometer range in elevations. 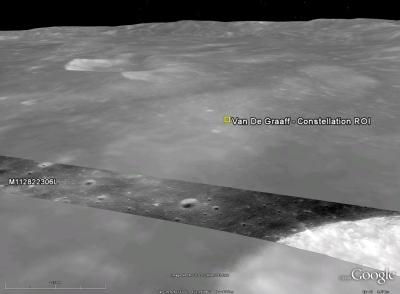 A far better comparison of Van de Graaff is available here, in visible light and false-color laser altimetry.
Posted by Joel Raupe at 2:09 AM