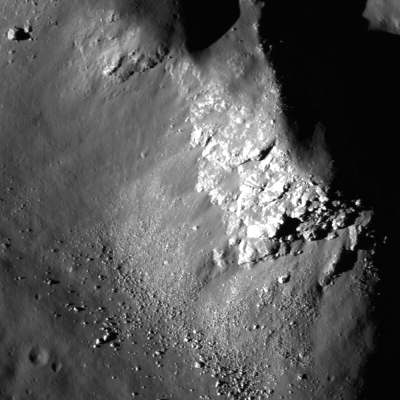 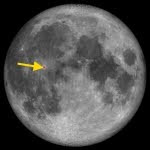 Although large boulders are not rare on the Moon, in-place bedrock is a rarity. The Moon is so impact-battered that most bedrock surfaces (unless exposed on very high slopes) are covered with regolith, and thus bedrock rarely crops out. Bedrock exposures are scientifically important.

Any given point on the lunar surface has been subjected to hundreds of millions of years of meteorite impacts; these impacts tend to redistribute rocks around the lunar surface. Rocks that you just pick up from the lunar surface therefore may not have originated from the point where you found it. Now, you might think from this fact that just sampling loose rocks might not be geologically informative, but loose rocks must have been transported or disrupted by a geologic or planetary process. These processes will overprint or alter a loose rock in some way, which will also provide incredibly useful information to the geoscientist. However, bedrock formed in the location in which it is found and therefore informs scientists about the local history. Craters are one of the places on the Moon that expose bedrock, often on the very high slopes. 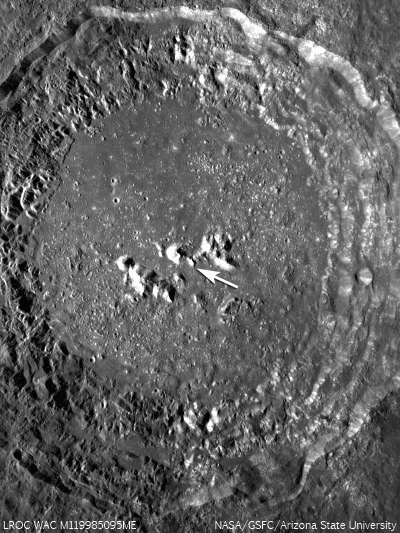 Copernicus, perhaps as never-before seen, showing a balance of features usually visible only in the relief of long shadows and other features obscured by their bright and complex albedo features when the sun is almost overhead, around a Full Moon as seen from Earth, courtesy of Arizona State's LROC team and the Wide-Angle Camera (WAC) on-board the Lunar Reconnaissance Orbiter. The arrow highlights the approximate location of the LROC Featured Image above. (LROC WAC image M119985095ME; 75 m/pixel; image width ~90 km) [NASA/GSFC/Arizona State University].
Today's LROC NAC image (M102293451) is a close up of the 93-km (58 miles) diameter Copernicus crater showing light-toned fractured bedrock exposed on the higher slopes on the central structural uplift. The bedrock observed in this NAC frame appears to be somewhat intact, and not a breccia (i.e., a rock consisting of a jumble of randomly oriented rock fragments).

It is only slightly brecciated (or fragmented), which is consistent with the manner in which crater central peak rocks are uplifted and exposed. This location gives us a glimpse of bedrock that was protected beneath the surface until exposed by the Copernicus impact event and later landslides. Dark materials appear to fill fractures in this outcrop that may be highly shocked materials (e.g., impact melt or breccias) that were injected into the rock during the formation of Copernicus. 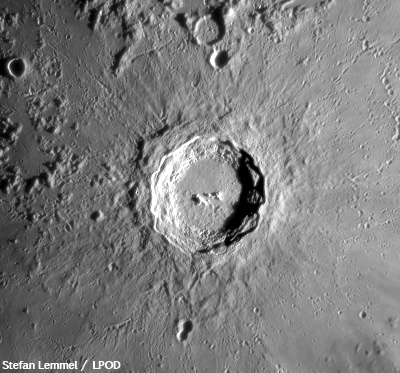 For the Lunar Picture of the Day, May 2, archivist and historian/scientist Charles Wood juxtaposed a full-sized version of the image immediately above by Stefan Lemmel with the LRO laser altimeter (LOLA) topography image released by Goddard Space Flight Center last Friday. Though none were used, to show how familiar and well-studied Copernicus is to Earth-bound photographers, we had several demonstration artwork prepared to accompany the LOLA Image of the Week this past weekend. With the release of the LROC close-ups of the Copernicus interior, it's hard to improve on Wood's choice of Lemmel's image from April 23 [LPOD/Stefan Lemmel].
Spectral data from previous lunar orbital spacecraft suggested that the bulk of these light-toned rocks are consistent with troctolite (different from basalt and anorthosite that commonly occur on the lunar surface).

A troctolite is a relatively uncommon igneous rock on Earth. Troctolites consist of almost equal parts of the minerals olivine and Ca-rich plagioclase and are found in some of the most ancient large subsurface igneous bodies on Earth. Such igneous bodies are thought to have formed so slowly over time that the crystals separated from the cooling liquid magma (somewhat like oil and water separating) and accumulated (either sinking to the bottom or floating to the surface) in the magma body. These magma bodies may be quite abundant beneath the lunar crust as suggested by spectral studies of crater central peaks and cosmochemical investigations of Apollo lunar samples (especially the regolith samples) as well as lunar meteorites.

Because bedrock outcrops on the central peaks of large impact craters can bring these deep subsurface materials to the surface, large crater central peaks (like Copernicus) are high-priority scientific targets for future human and robotic exploration. Future astronaut explorers inside Copernicus will be exploring one of the most beautiful and dramatic places in the Solar System - and making tremendous scientific advances in the process!

Plan your own visit to the central peak of Copernicus. 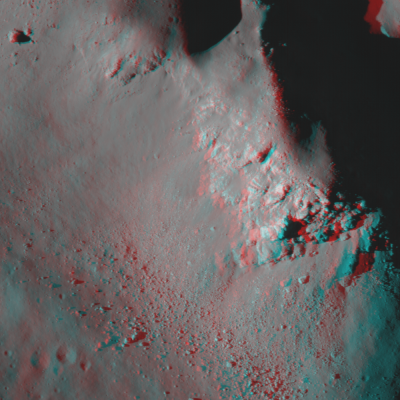 Anaglyph of the Featured Image, showing one of the central peaks of Copernicus. Viewing requires anaglyph "3D glasses," with a red lens on the left and blue on the right) [NASA/GSFC/Arizona State University].
Posted by Joel Raupe at 5:06 AM