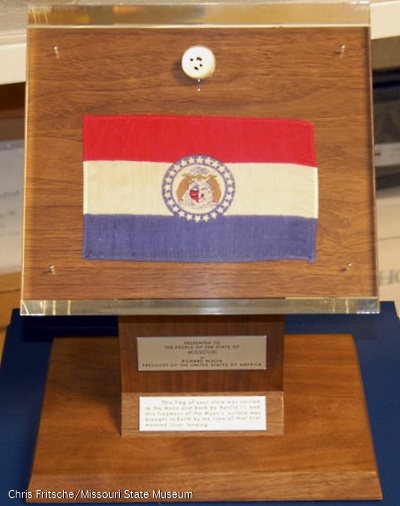 Fragments of Missouri’s moon rocks are mounted in a case above a Missouri flag that flew on Apollo 11. The case is in storage in the basement of the state Capitol Chris Fritsche/Missouri State Museum/Columbia (MO) Daily Tribune].

Fragments of a moon rock collected during the Apollo 17 mission and given to Missouri are safe and sound in the basement of the state Capitol — not lost, as was indicated in a news report last weekend.

The article in Sunday’s Tribune, taken from The Record of Hackensack, N.J., reported that 19 states, including Missouri, could not account for the “goodwill moon rocks” given to states to commemorate NASA’s last manned mission to the moon. After reading the story, staff at the Missouri State Museum went looking for it, said Linda Endersby, interim museum director.

“We knew we had it in our collection; we just didn’t know exactly where it was,” she said. “From the description in the newspaper article, our curator said she saw it and knew where it was.”

Although Missouri’s moon rocks weren’t accounted for, they were never lost, said Judd Slivka, a spokesman for the Department of Natural Resources, which oversees the museum. It’s more accurate to say they simply weren’t found, he said, because no one was looking for them.

Read the article HERE.
Posted by Joel Raupe at 7:22 PM