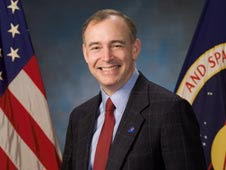 NASA ousted the outspoken head of its Constellation moon program on Wednesday, prompting an immediate protest from congressional lawmakers who again accused the White House of taking steps to kill the project.

"It is a great concern to us that you take the manager out of his position and reassign him to another position," said U.S. Rep. Gabrielle Giffords, an Arizona Democrat who has fiercely opposed White House efforts to shut down Constellation and its aims to return astronauts to the moon.
Read the article, HERE.
Posted by Joel Raupe at 9:09 PM