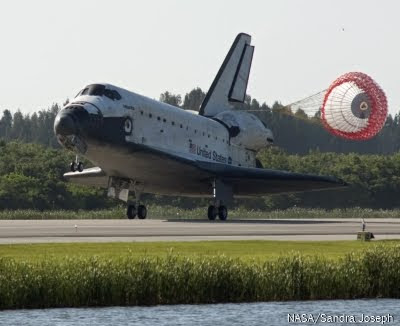 Space shuttle Atlantis' drag chute slows the vehicle as it rolls down Runway 33 at the Shuttle Landing Facility at NASA's Kennedy Space Center in Florida. Landing was at 8:48 a.m. EDT, completing the 12-day STS-132 mission to the International Space Station. The mission is the last planned for Atlantis, and third to the last planned for the Space Shuttle program [NASA/Sandra Joseph].

MDAA - Brett Lambert, Pentagon’s industrial policy chief, said that the U.S. space industry is getting less competitive against Asian and European firms, eventually threatening decades of U.S. primacy in this area. He argues that it is necessary to ease export controls on technologies to help the financing of the sector.

The dominance of the U.S. space industry is threatened by European and Asian firms, the Pentagon’s industrial policy chief said May 25.

“We’re at a tipping point with our space industry,” Brett Lambert said at a forum on the strength of the space industrial base hosted by the George C. Marshall Institute think tank. “We have for so long been the dominant player and the most technologically advanced player.”

European and Asian countries have developed their space industrial bases “not because they wanted to make those investments [but] because they didn’t have access to our technology,” he said. “As they get more capable, we will become less competitive.”