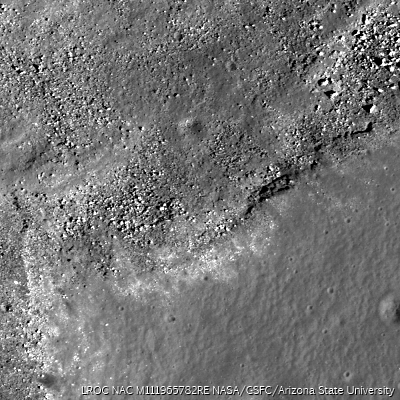 Close-up on the rim of unofficially named "Sinuous Rille A," on the western edge of the Marius Hills Constellation Region of Interest, showing materials slumped into the bottom of the rille bed towards the northwest, and (possibly) an outcrop; prime location for fieldwork and sample collection. One of the several hundred volcanic features located in the Marius region. Exploration of this site will yield important insights into planetary volcanism. Full-sized portion of M111965782RE, HERE. Area of field highlighted above is 550 meters [NASA/GSFC/Arizona State University]. 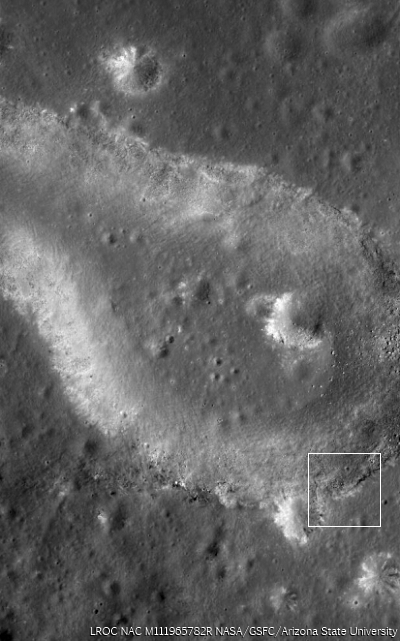 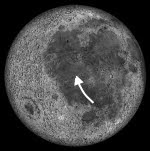 This is the heart of the Constellation Region of Interest in the Marius Hills. You can see the rim and interior wall of the head of a large, unnamed sinuous rille directly adjacent to the ROI (13.58°N, 304.2°E).

Astronauts exploring this location will be able to learn about the geologic processes that form sinuous rilles and develop new insights about lunar and planetary volcanic processes.

One of the longest sinuous rilles on the Moon, the rille is one of 20 in the Marius Hills region. The incredible geologic diversity of the Marius region - where mare deposits, volcanic domes, sinuous rilles, and small localized pyroclastic deposits (including the Harayuma Skylight, the "Marius Hills Hole," identified from data returned by Japan's lunar orbiter Kaguya in 2009) are all in roving distance from one another - making the Marius Constellation site a geologist's paradise, a prime candidate for a human lunar sorties.

Viewable through terrestrial telescopes, the Marius Hills region of the Moon has been a high-priority target for human lunar exploration for almost 50 years. In fact, the Marius Hills region was one of the top candidates for an Apollo landing site (and, as memorably recounted by Don Wilhelms in To a Rocky Moon, was very nearly the choice for the Apollo 15 landing site).

Had the Apollo landings not come to a premature end, it is likely that Americans would have explored the region during the early 1970s.

The geology of the Marius Hills region is very complicated. Located in southwest Oceanus Procellarum west of Marius crater (lending the region its name) and northeast of the famous Reiner Gamma formation, the Marius Hills complex represents the largest concentration of volcanic features on the Moon.

Over 250 volcanic domes are found here, along with sinuous rilles, as well as some steeper-sided, roughly cone-shaped positive relief features that previous scientific investigations of the region have suggested are composed of pyroclastic materials. Unlike the domes created by non-mare volcanic processes (such as the Gruithuisen Domes, also a Constellation Region of Interest) which occur in the lunar highlands near mare-highlands boundaries, the Marius Hills complex is located on a plateau completely surrounded by Oceanus Procellarum.

Multispectral data from the Clementine mission (1994) indicates the composition of the Marius Hills domes and cones are very similar to the surrounding mare basalts. 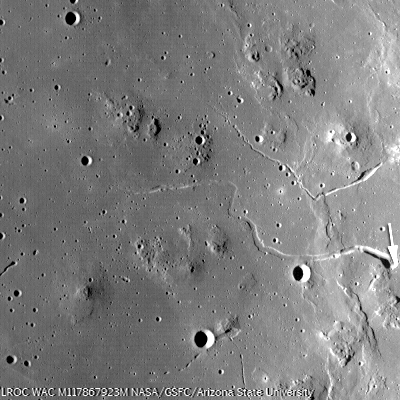 LROC Wide Angle Camera regional context image for the LROC Featured Image of the Marius Hills region (M117867923M). The approximate position the 550 meter-wide area within the image is highlighted by the small white arrow. Numerous volcanic features are visible within the confines of this image. The full-sized image is HERE. Field width within the image above is 58.5 km [NASA/GSFC/Arizona State University].

So, what geologic process concentrated all of these volcanic features in this region? We simply don't (yet) know the answer to that question, although based on the available data we can make a reasonable hypothesis: that the Marius Hills domes were produced billions of years ago by episodic eruptions of low effusion rate, low-temperature, viscous, high crystal content mare lavas contemporaneously with emplacement of the surrounding mare basalts. That model would require some sort of long-lived, shallow, and occasionally replenished source reservoir for the dome-forming lavas, with the sinuous rilles being formed later by subsequent eruptions of higher-effusion rate, less viscous mare materials that didn't form domes.

We need further exploration to ascertain whether this model is accurate. Important contributions to understanding the geology of the Marius Hills will be made with long-lived teleoperated surface mobility systems that can survey and explore the many geologic features in the area, but we won't know for certain until human explorers reach the site to do the fieldwork, collecting samples needed to answer key scientific questions.

Check out the full-resolution Narrow-Angle Camera frame, and plan your own adventure in the Marius Hills!