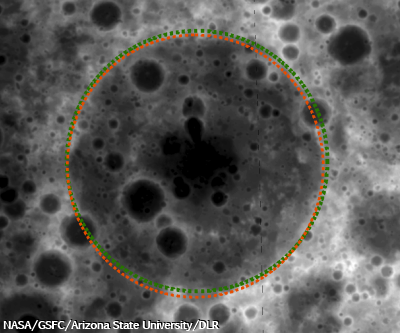 Figure 1: The lesser-known impact basin Freundlich-Sharonov (centered ~ 18.5°N, 175°E) is revealed in this Digital Terrain Model (DTM) created using data from LROC Wide-Angle Camera stereo images. Darker shades represent lower elevations and higher elevations by increasingly brighter shades. The diameter of the orange-colored ring is 595 km. DTM images like these allow scientists to inventory and study the morphologies of lunar basins. (Most of the mare-intrusion in this area is not readily apparent to the naked eye, presumably from orbit. The basin is north of the equator near the far side's central meridian. Mare material has largely become obscured by an overfill of ejecta from later impacts in the area.) [NASA/GSFC/Arizona State University/DLR]. 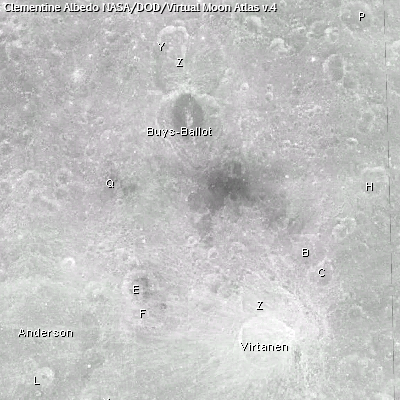 Freundlich-Sharonov basin is all but invisible in this sampling of roughly the same region within the LROC Featured Image taken from the Clementine (1994) far side albedo mosaic [NASA/DOD]. 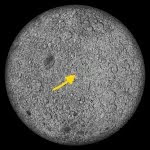 Large impact structures represent important time markers and clues to the early history of the Moon. Unfortunately, older basins may be highly degraded and are sometimes difficult to identify in images. Digital Terrain Models (DTMs) allow us to make more confident identifications of lunar basins and to study their morphologies. Large numbers of tentatively identified lunar impact basins, thoroughly listed in catalogs [1], are awaiting verification and detailed investigation of their ages.

Previous lunar topographic data sets used for studies of basins include the stereo model derived from Clementine images (5 km resolution). Currently, LRO's Lunar Orbiter Laser Altimeter (LOLA) is collecting a global topographic dataset. Due to LRO's polar orbit, the LOLA topographic products have high resolution (better than 40 meters) at the poles and suffer from orbit gaps of about a kilometer in equatorial areas. 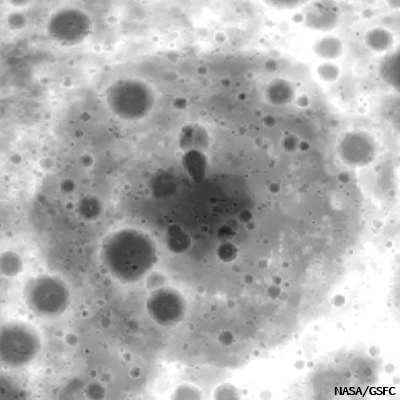 Early LRO/LOLA laser altimetry of the Freundlich-Sharonov basin for comparison with LROC photographic elevation studies and the Clementine visible light albedo image of the region further above [NASA/GSFC].
The DTM of the Nubium basin (below) was made from overlapping LROC Wide-Angle Camera (WAC) images obtained in adjacent orbits. The topography has a uniform global spatial resolution of 500 meters, except at the poles where deep shadow results in areas of no coverage. Using these new WAC topographic data, several degraded impact structures were positively confirmed (opening image and Fig. 2). 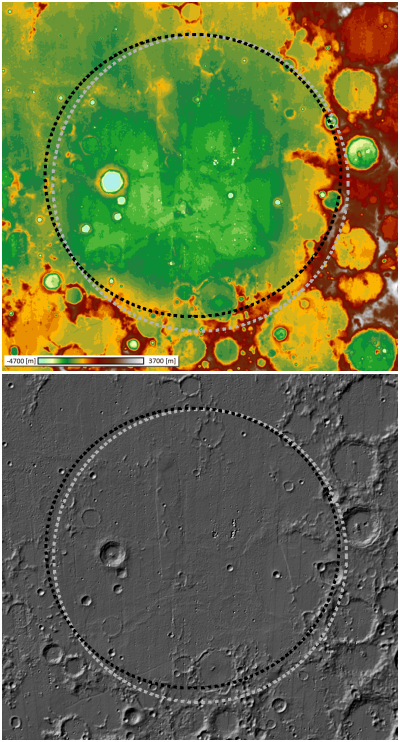 Ancient Mare Nubium basin, as represented from data collected from the Lunar Reconnaissance Orbiter. Above the LROC Digital Terrain Model of the near side landmark is set atop a mosaic of multiple LROC Wide-Angle Camera images gathered in adjacent orbital passes.

Figure 2: The geographic location of the ancient Nubium basin (20°S, 344°E) is difficult to determine in images. The color-coded DTM (above-top) and the hill-shaded model (above-bottom) help show Nubium due to a slight topographic depression easily seen in the topographic map. Parts of a rim structure can be identified in the southeast, suggesting a basin diameter of about 675 km (black dashed), which is consistent with previous estimates of 690 km (gray dashed, [1]).

The mean rim height (the height difference between rim and basin floor) is ~1.8 km according to the DTM. The hill-shaded model accentuates Nubium's smooth floor [NASA/GSFC/Arizona State University/DLR]. 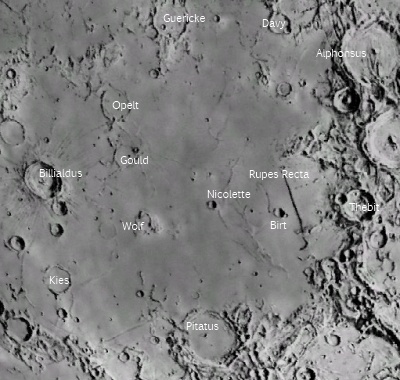 Though Nubium is a near side landmark it's basin-like features are highly degraded, and it can hardly be recognized as a basin at all in the Clementine albedo mosaic. The LROC WAC elevation study validates a confirmation of Nubium as an authentic basin from laser altimetry gathered by Japan's first lunar orbiter Kaguya (SELENE-1) in 2009. 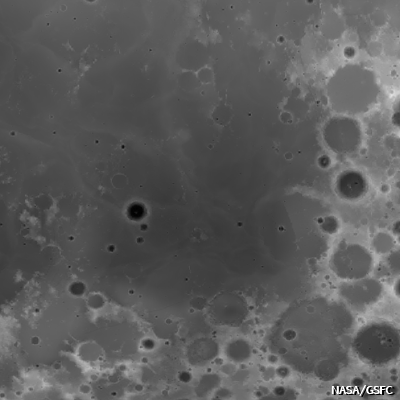 Finally, for even further context and comparison, here is a bonus look at Mare Nubium in a representation of LRO/LOLA laser data points from the initial release of LOLA data to the Planetary Data System, March 15, 2010 [NASA/GSFC].

Landmark features like Rupes Recta, the Straight Wall, hardly show at all in the early LOLA elevation study, at least not as one has come to expect. Instead, in both LROC and LOLA small-scale representations of data, the marked differences in grade on either side of this famous telescopic target stand out better than the fault itself.

Charles Wood at Lunar Picture of the Day (LPOD) takes up a learned comment on these newly released images of Mare Nubium, HERE.
Other basins, such as Mare Marginis, (Figure 3, below) are not yet positively confirmed. 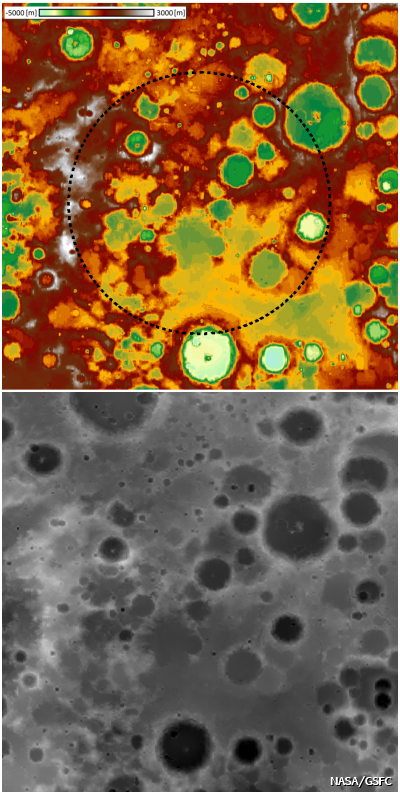 Mare Marginis is more easily recognized as a telescopic landmark to viewers of an early evening's crescent Moon, straddling the eastern limb and the boundary between the near and far sides of the Moon, further east of Mare Crisium. Above top are the results of elevation analysis from stereoscopic LROC WAC photography of the region, near the equator. Above-bottom is roughly the same area as determined from initial LOLA laser altimetry data [NASA/GSFC/Arizona State University/DLR]. 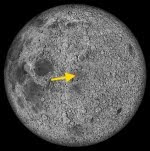 Figure 3: Confirming the location of Marginis basin (20°N, 84°E), with a proposed rim diameter of ~580 km (black dashed, [1]), is difficult. A chain of mountain peaks in the western area may represent remnants of a basin rim. However, this chain could also be part of the neighboring prominent Crisium basin, located to the west. With time the WAC and LOLA topographic maps will have higher resolution and more accuracy to help scientists better decipher the location, size, and relative ages of ancient lunar basins. 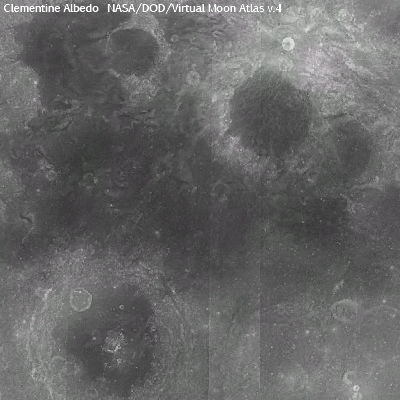 Mare Marginis was so-named because it's mare-infill was distinct in the highly-foreshortened and necessarily steep angled views from Earth prior to the Space Age. This mare inundation, whether it is truly distinct to Marginis or coincident with a nearby cataclysm, is still visible from lunar orbit. But it's most striking feature in the Clementine mosaic above, something completely invisible in any elevation study made so far, are countless swirl albedo markings -- perhaps the richest such field on the Moon. These features appear to coincide with a wide-spread, close-cropped crustal magnetic anomaly here, on the face of the Moon directly opposite, or "antipodal," to Mare Orientale. The latter needs little analysis to be confirmed as a basin.
[1] Wood C.A. (2004): Impact Basin Database.
Posted by Joel Raupe at 6:42 AM