Humboldtianum two for one from LRO 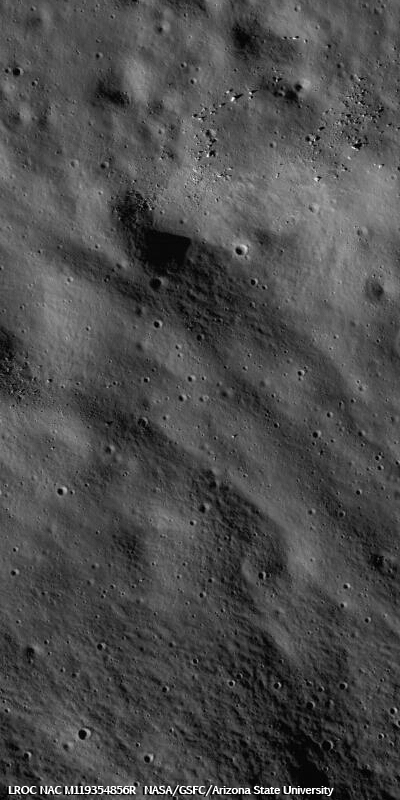 Rectangular sampling of LRO Narrow-Angle Camera frame M119354856R, including the area at upper left center brought forward as LROC News System's Featured Image, June 4, 2010. "Small crater and associated boulders near the center of the Constellation Region of Interest in Mare Humboldtianum," straddling the boundary between the mare of the inner basin and the lunar highlands. "Note the different textures of the highlands (bottom) and mare basalts (top). Explorers at this location will obtain key information about the lunar geologic timescale. Area shown in the image above is approximately 1 km wide; LRO orbit 2723, January 28, 2010, resolution = 0.52 m/pixel [NASA/GSFC/Arizona State University].
Bashar Rizk
LROC News System 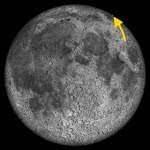 Mare Humboldtianum is an ancient impact basin on the northeast limb of the Moon whose inner ring was flooded by basalt billions of years ago to form the mare. The Constellation region of interest in Humboldtianum is located in the southwest portion of the mare, straddling the mare highlands boundary.
In LROC's Featured Image, June 4, 2010, we see the center of the Constellation Region of Interest, where the mare basalts meet the highlands. The highlands are characterized by their high reflectance and the distinctive, so-called "elephant skin" texture, while the mare basalts are characterized by their low-reflectance, relatively smoother surfaces. 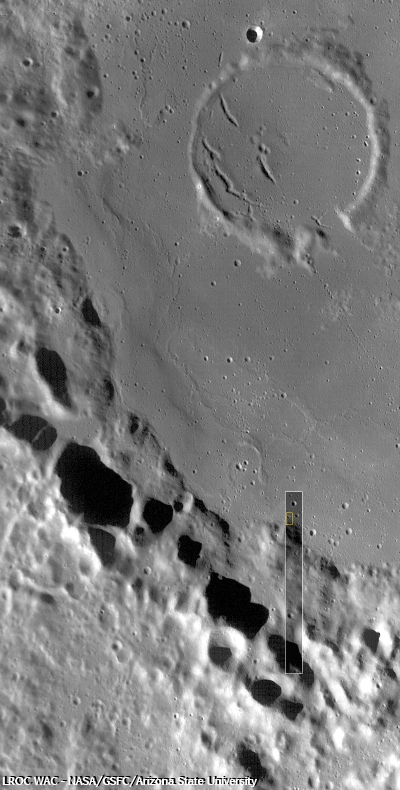 LROC Wide Angle Camera context image showing the approximate location of LROC's Featured Image in Mare Humboldtianum. The image at the top of this post is approximately within the smaller (yellow) rectangle, nested, in turn, inside the full-swath of NAC frame M119354856R NAC frame, superimposed on the WAC mosaic above. The 57 km-wide WAC image is represented by a white rectangle drawn upon the LOLA false-color elevation model of Humboldtianum, below [NASA/GSFC/Arizona State University].
Since (Humboldtianum ROI) is at the edge of a large impact basin, based on the Apollo experience it is likely that you can find samples of the basin melt sheet here. During large, basin-forming impact events, the shock of the impact disaggregates rocks in the impact zone, and these smaller fragments are swept up in the sheet of impact melt that sweeps outward from the point of impact. Consequently, the solidified impact melts contain fragments of the rocks and minerals that were present in the crust at the point of impact. Lunar scientists can therefore study these impact melts, billions of years after the impact, to unravel fundamental geochemical information about the composition and heterogeneity of the lunar crust.
For example, how would the basin impact melts we collect in Humboldtianum differ from those collected at the landing sites of Apollo 15, 16, and 17?
We can't answer that important question until human explorers do the necessary fieldwork at this site. Also importantly, the highlands and mare samples collected from this location would be radiometrically age-dated, providing key information about when the basin formed and when it filled with the erupting mare basalts--important questions for helping to clarify the lunar geologic time scale.
The Humboldtianum site offers several operational benefits. As a near-side location it would give astronaut explorers the chance to survey a unique, high-latitude location while remaining in Earth's line of sight, which is important for communications. The mare regolith at this site would also provide easy access to feedstock for in-situ resource utilization (ISRU), while still enabling access to the lunar highlands.
Plan your own journey to Mare Humboldtianum!
For more information on LROC's observation campaign for the Constellation program regions of interest read this Lunar and Planetary Science Conference abstract, and visit the LRO Science Targeting Meeting website (look for the baseball card summary sheets for each site: part 1, part 2). 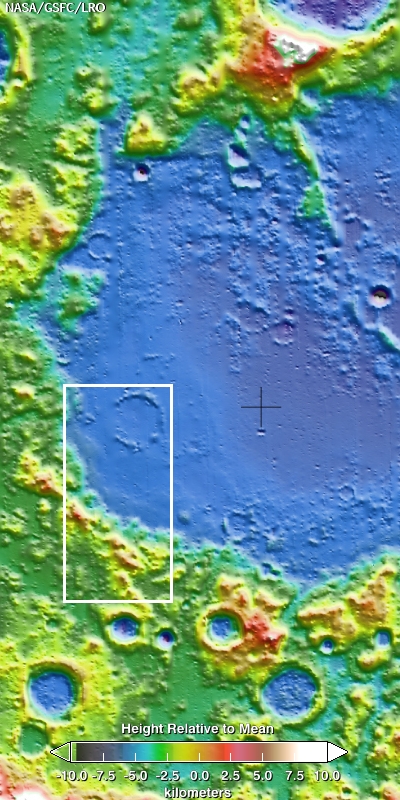 Like a box within a box, or a Russian nested doll, a portion of the LRO Lunar Orbiter Laser Altimeter (LOLA) "Image of the Week," also focused on Mare Humboldtianum on June 4, lending further context to the LROC WAC frame above, represented by the 57 km-wide area within the white rectangle [NASA/GSFC].
GSFC/LOLA - Located along the northeastern limb of the Moon (centered at approximately 56.8°N, 81.5°E), Humboldtianum Basin is a (Second Tier) Constellation program Region of Interest. LOLA data show the 650 km diameter basin is more than 4.5 km deep. The impact that formed Humboldtianum is estimated to have happened during the Moon's Nectarian Period, approximately 3.92-3.85 billion years ago.
Many other multi-ring impact basins are also believed to have formed during this time period, including Crisium.
In the inner ring of Humboldtianum Basin is Mare Humboldtianum (Humboldt's Sea). LOLA data reveal the relatively smooth, flat floor of the mare. The younger mare is believed to have formed during the Late Imbrian, approximately 3.8-3.6 billion years ago.
Also visible in the basin are smaller craters that were partially filled in by the mare lava. Humboldtianum was named after explorer Alexander von Humboldt (1769-1859) and is one of only two lunar seas named after people, the other being Smythii named for British astronomer William Henry Smyth (1788-1865).
* The LRO team at Goddard Space Flight Center shines as we approach the unbelievable 1st Anniversary of the launch of LRO, together with LCROSS, June 18, 2009, - by presenting an outstanding "two-for-one." The result speaks for itself.
LOLA Image of the Week, simultaneous with the most recent LROC Featured Image from Arizona State University, was released Friday, June 4, 2010.
Posted by Joel Raupe at 9:50 PM