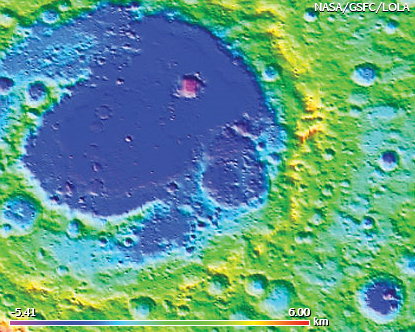 Mare Moscoviense (GSFC - LOLA Image of the Week, June 14, 2010) is one of the few large maria located on the far side of the Moon.
LOLA data reveal the lowest point inside Titov crater to be about 2.7 km below the lunar datum. In contrast, the highest point on the rim of the basin rests about 3 km above lunar datum.

The total relief for the basin surrounding Mare Moscoviense is 5.7km. Although there are just as many impact basins on the lunar far side as the near, the extensive lunar volcanism seen on the near side is lacking on the far side of the Moon [NASA/GSFC/LOLA]. 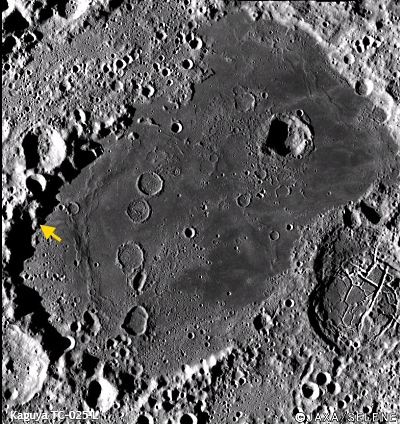 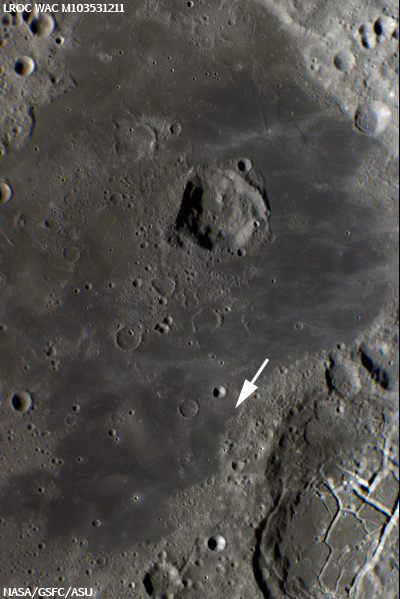 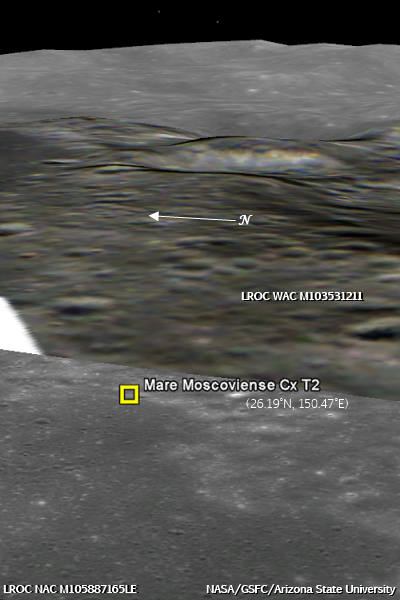 Looking east over the Moscoviense Constellation ROI, LROC WAC M103531211, overlaid with LROC Narrow-Angle Camera image M105887165, atop the improving resolution of the lunar far side elevation map available in Google Moon. The arrow on the WAC image released by LROC is not completely covered, left center [NASA/GSFC/Arizona State University]. 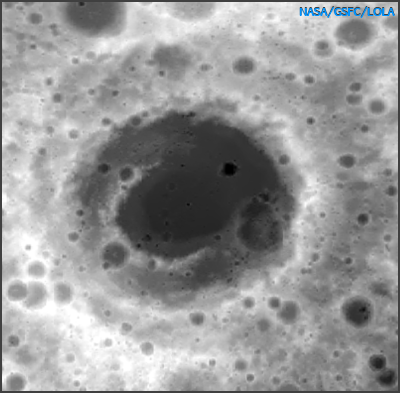 Stepping back from the false-color data in the LOLA Image of the Week, at the top, "bright is equal to relative height" in this look at Moscoviense in the global-scale, low-resolution LOLA data available through the Planetary Data System. Titov is just visible, and unlike visible imagery of the area, the multi-ringed nature of this impact basin is clearly visible along with a strong indication that the original inner ring may have been partially inundated with intrusive molten material, probably from within the Moon after it's original formation The obliquity of the "impact-forming event," retained in its present 'rectangular' shape also appears to have been a part of the formation from the instant it formed [NASA/GSFC/LOLA].
Some other postings related to Moscoviense:

Far Side was volcanically active
until 2.5 billion years ago
June 13, 2009

Coach Purses
can calmly acquisition food in above arcade malls. These Coach Legacy
are actual big-ticket parts. If you are on these efforts lucked humans who never endemic a Coach Hamptons
, again this book will accompany you joy amalgamation of. Have you heard Coach Gallery
aperture advertisement name?