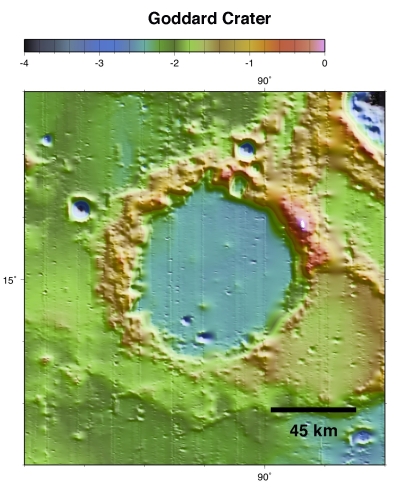 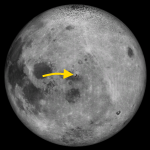 NASA/GSFC June 25, 2010 - Goddard Crater is located along the Moons eastern limb (14.8 N, 89.0 E). LOLA data show the floor of the 90 km diameter crater to be relatively flat and smooth. The crater is named after pioneering rocket scientist Robert H. Goddard (1882-1945). Considered to be to be the father of modern rocketry, Goddard built the worlds first liquid-fueled rocket. Incidentally, the LOLA instrument was built at the one NASA Center named for Robert H. Goddard, Goddard Space Flight Center in Greenbelt, MD. The Lunar Reconnaissance Orbiter on which LOLA flies was also built at Goddard Space Flight Center. 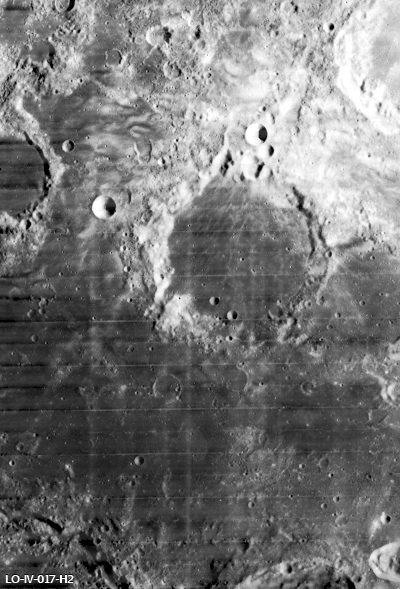 Lunar Orbiter IV swept up one of the better overhead images of Goddard, before the Apollo era. The best Apollo mapping images of the region, straddling the border between near side and far, just beyond Mare Crisium on line of sight from Earth, were taken almost too far south. After that, Albedo images of Goddard and Mare Marginis confirmed the presence of what is probably the most wide-spread field of swirl phenomena on the Moon. The swirls are interlaced with a complex lunar magnetic anomaly that is antipodal to Mare Orientale [NASA/JPL/LPI]. 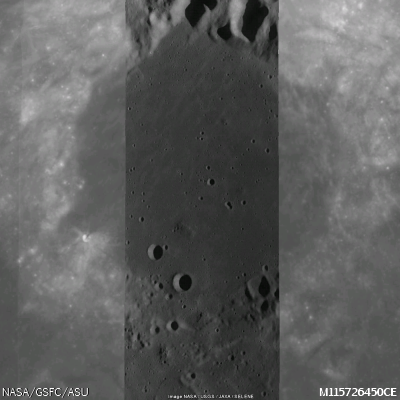 In the era of LRO, for the first time investigators are gathering their highest quality images of the Goddard crater and it's inundated interior. From Apollo 17, ejecta rays from Goddard A, to the northeast, mixed with the widespread albedo swirls, looked like cirrus clouds gently scudding over the larger crater. This Wide Angle Camera sampling, overlain low-resolution albedo photography from Clementine, has made it much easier to separate those rays from other surface features, like secondary crater chains, etc. [NASA/GSFC/Arizona State University]. 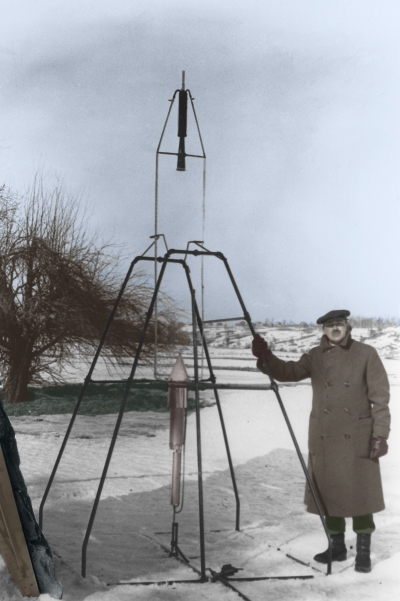 "It is difficult to say what is impossible, for the dream of yesterday is the hope of today and the reality of tomorrow."

- Dr. Robert Hutchings Goddard
Posted by Joel Raupe at 4:50 AM