Return to Moon, Schmitt says, important for protection of liberty and freedom 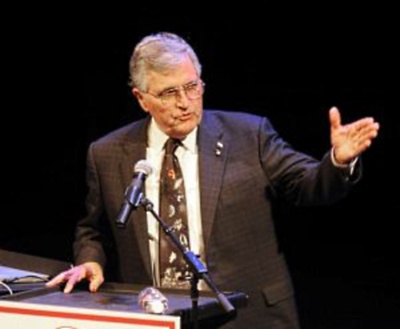 Dr. Harrison “Jack” Schmitt, lunar module pilot for Apollo 17 speaks at the Barter Theatre in Abingdon, Virginia, Wednesday evening, June 16, 2010 [Bristol Herald Courier].
In a speech to a packed Barter Theatre on Wednesday, one of the last men to step on the moon – one of just 12 who’ve had the opportunity in the history of human spaceflight – interspersed humor with a serious message: the need for America to steer its best and brightest toward the sciences and a return to the moon.
Schmitt was at the Barter as part of a week-long series of space-focused activities ahead of the Friday opening of “The Blue-Sky Boys,” a play about the creative process behind putting men on the moon.
“Not being there would have been like giving up the oceans 200 years ago,” Schmitt said of landing on the moon. “And it would not be good for this country and for the protection of liberty and freedom on this planet.”
Read the article HERE.
Posted by Joel Raupe at 6:39 PM