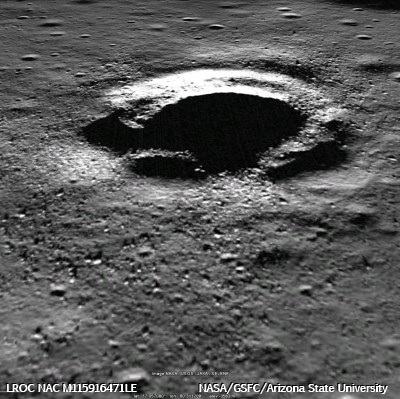 It's a fresh impact and unusual, if natural. It clearly caught the attention of the LROC targeting team. A cluster of narrow-angle camera surveys of the area, near the center of Mare Crisium (17.05°N, 60.31°E), were released to the Planetary Data System this past March.
It appears to be the final resting place of an "artifact of human activity," perhaps one previously undetermined.
And yet... looks can be deceiving. In the contextual view of the image field below, is that a trail, associated with this fresh impact, connecting it with what appears to be a far older impact, just to the southeast? If the depressed terrain is not just a more likely coincidence, perhaps the more recent impact disturbed or dampened the surface and partially uncovered surface features buried below the immediate surface. 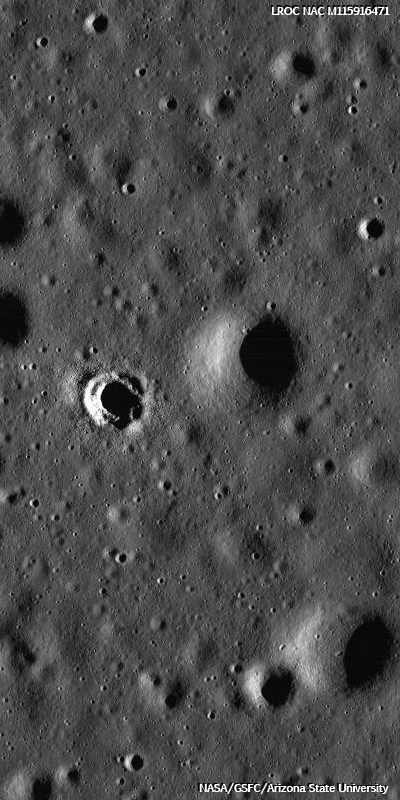 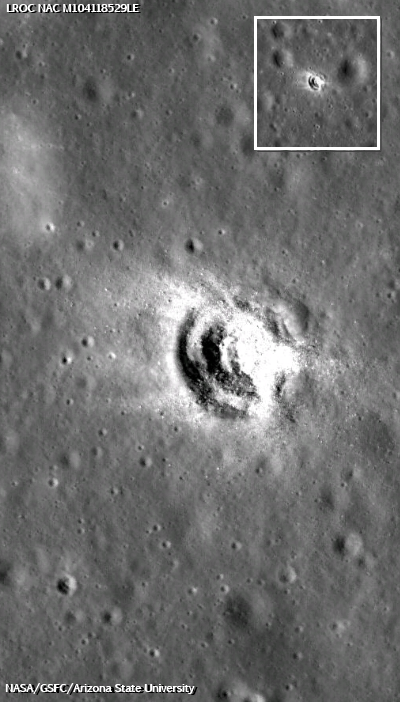 By way of comparison, the inset above shows the feature as shown at only slightly more "Zoom" than the in the full image immediately prior from December (the larger frame zooms in on the feature still further in this Commissioning Phase image). The LROC team swept up the feature in Narrow Angle Camera frame M104118529LE, during orbit 506, August 5, 2009; 137.46 km over 16.74°N, 60.47°E (phase angle = 59.84°) [NASA/GSFC/Arizona State University]. 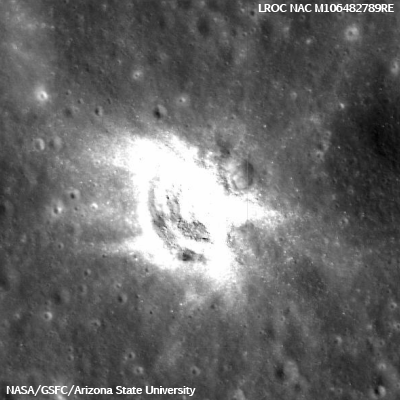 And, yet Again, on September 1, 2009 during LRO orbit 836 (LROC NAC M106482789RE), spacecraft cameras were slewed 4 degrees from 145.32 km over 17.81°N, 60.43°E, apparently with the aim of capturing the feature in a Sun quite a bit higher in lunar the sky (phase angle = 30.16°).
A transition to a more highly illuminated moonscape was nearly complete, unveiling some finer features previously hidden in shadows even as others were washed out in the albedo of rougher terrain. The center of the impact is almost completely washed out in the higher sun, though the same conditions allow investigators to measure the wispy rays of ejecta spread away from the impact. [NASA/GSFC/Arizona State University].
Posted by Joel Raupe at 7:33 AM