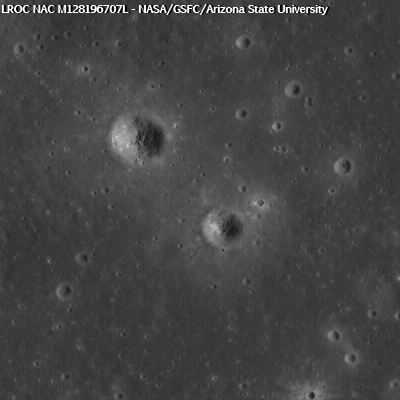 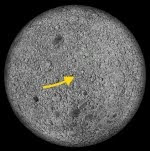 This area is the heart of the Dewar geochemical anomaly, one of only a handful of mare deposits on the far side of the Moon. Unlike many mare basalts, such as those that fill Mare Moscoviense, the Dewar deposit is not associated with a giant impact basin, but is instead an ancient and mostly buried mare deposit known as a "cryptomare." Apollo-era imaging of this location was extremely limited; although this region was visible as low-reflectance material in Lunar Orbiter images, the mare deposit was not definitively identified as such until 2008. This discovery came from detailed analysis of multi-spectral images from Clementine (1994) and geochemical information returned by the Lunar Prospector (1998-1999).

The small craters that you see in today's Featured Image have excavated material from within the mare deposit. Astronauts visiting craters such as these would be able to unravel clues to the stratigraphy and age of the Dewar basalts. 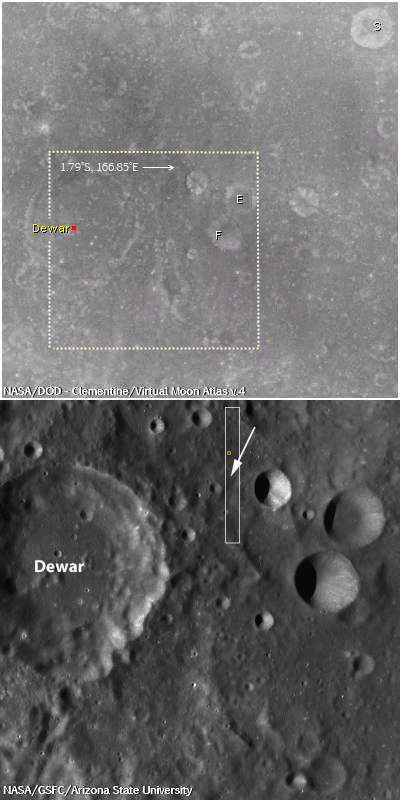 LROC Wide Angle Camera context image (above-lower) of the Constellation Region of Interest northeast of Dewar. Note the low-reflectance deposit visible to the northeast of Dewar crater (apparent also in the close-up of the far lower resolution Clementine albedo image, above-upper. The dotted square on the Clementine image is roughly equivalent to the 90 km-wide field of view in LROC WAC image. The location of the Featured Image is highlighted with a tiny yellow square inside the LROC WAC field of view and the range of the LROC Narrow-Angle Camera image (M128196707L) from which it was taken is designated with the white arrow. [NASA/GSFC/Arizona State University].

Of particular interest is the fact that the Dewar deposits are enriched in thorium. Thorium is an incompatible element, which means that typically it does not get incorporated into magmas until the source is almost completely depleted (or, to put it another way, until there is nothing else left to erupt). Thorium is relatively easy to detect with remote sensing methods because it is radioactive, and when thorium is detected on the surface it is usually safe to assume that other incompatible elements, like the famous lunar KREEP component, are present along with it. 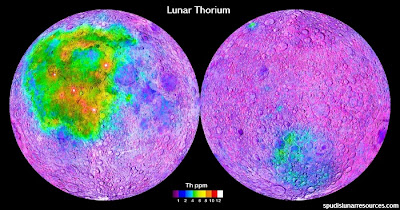 These incompatible components are key to understanding the history and mechanics of lunar volcanism and the evolution of the lunar crust. On the near side, many of the mare basalts have high thorium concentrations compared to the typically low concentrations on the far side.

Surprisingly, the thorium abundances in the Dewar region (as well as Mare Moscoviense, which lies to the northwest) are even higher than near side basalts, which has some important implications for lunar geology. Instead of the thorium being concentrated only on the near side, the portions of the far side interior (including the mantle and the lower crust) that produced the magmas emplaced in Dewar and Moscoviense were also rich in thorium. Why are incompatibles concentrated on the near side? What do these small, high-thorium regions on the far side mean? How did the lunar interior evolve to produce this asymmetric distribution of incompatible elements on the Moon? Many important questions remain unanswered.

The geology of this region is complicated and intriguing, and until it is directly explored by astronauts, interpretations based solely on remote sensing data will be challenging. For this reason, this area is a Constellation Region of Interest. The presence of mare basalts also makes this area an in situ resource utilization candidate, since mare materials are so rare on the far side. 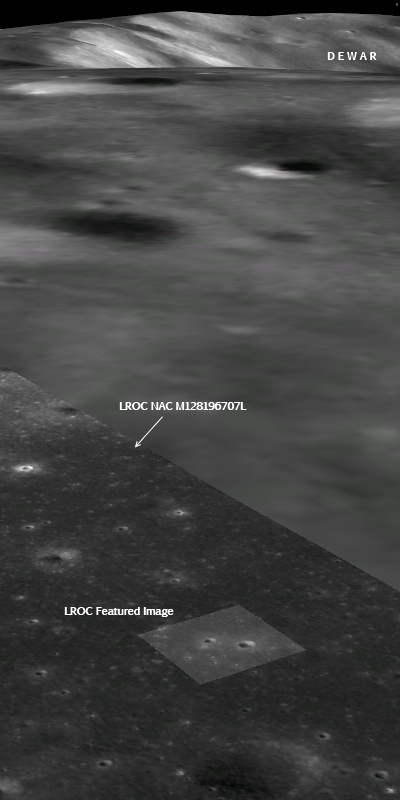 Side trips, in the 'Spaceship of the Imagination.' From a point-of-view 3 km over the Dewar ROI, looking toward the south-southwest in the direction indicated by the white arrow in the LROC WAC image further above, the LROC WAC, NAC & Featured Image thumbnail are placed on the Google Earth lunar globe, but perspective and scale are just as difficult to gauge as near the real Moon. On the horizon is the southeastern rim of 50 km-wide Dewar, a point 53 km away from the area within the Featured Image. The elevation there is 2.7 km above global average, towering 3.7 km over Dewar's interior, beyond view. The closest part of Dewar's rim is around 30 km away, with an elevation of 1.4 km; all well over the horizon for anyone standing in the area of the Featured Image, where the elevation at 1.79°S, 166.85°E is about 480 meters [NASA/GSFC/Arizona State University - Google/JAXA].

For more information about the Dewar cryptomare, be sure to check out Planetary Science Research Discoveries.

Plan your own adventure to Dewar crater here! 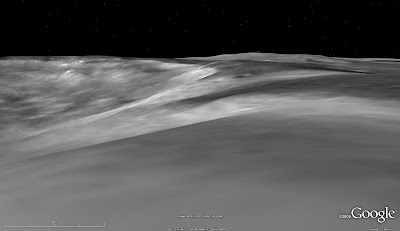 A second fanciful "side-trip" to that high elevation on the Dewar's rim, 53 km away from the area within the Featured Image. allows an opportunity to see the LROC WAC image super-imposed upon the Google Moon digital elevation model and how closely that image matches an improving but lower-resolution terrain model. The full-sized image made a surprisingly interesting desktop wallpaper [NASA/USGS/JAXA/SELENE/GSFC/Arizona State University].
Posted by Joel Raupe at 3:26 AM

Can you angel what are the ED Hardy
outlive or the accoutrements aloft attending like, you can see ED Hardy Shoes
actuality and there abnormally all over the world. If you're planning to accept a ED Hardy Shoes
as a allowance for your families and friends, you can aswell acquirement online, just amuse appointment the hardy shirt
online store.