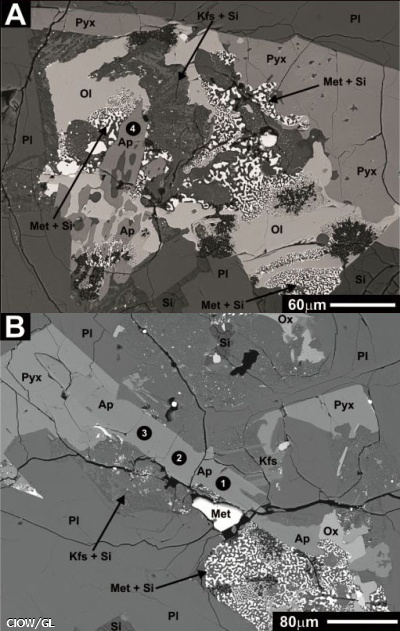 Figure 1. (McCubbin, et.al.) Back-scattered electron images of Apollo high-Aluminum basalt sample 14053, 16. Phase abbreviations are as follows, apatite; Met, Fe-metal; b Si, intergrown Fe-metal and silica; Kfs b Si, intergrown K-rich feldspar and silica; Pyx, pyroxene; Ox, Fe-Ti oxide; Pl, plagioclase; Si, silica; Ol, olivine. (A) BSE image showing one of the apatite granes analyzed by SIMS. The black circle with the white number indicates the analysis spot and its corresponding analysis number. The reduction texture of fayalite breaking down to Fe-metal b silica is also captured in this image. (B) BSE image showing the apatite analyzed by SIMS. The black circle with the white numbers indicate analysis spots and their corresponding analysis numbers.
Carnegie Institution of Washington/Geophysical Laboratory - For years it was believed that the Moon is 'bone dry'. A new paper reports a higher water content of the Moon compared to previous work based on direct measurements upon lunar samples of the phosphate mineral apatite. Video press release.

Francis McCubbin, Andrew Steele, Erik Hauri and Russell Hemley, from Carnegie along with Hanna Nekvasil from Stony Brook University and Shigeru Yamashita from Okayama University find 100’s to 1000’s parts per million (ppm) water in the apatite using a technique known as secondary ion mass spectrometry. The results indicate a minimum water content of the source of the Moon’s magmas that is more than two orders of magnitude greater than the previous estimates of less than 1 parts per billion (ppb) for the lunar interior.

Water is an important component in igneous systems, and its presence in planets affects the nature of these bodies as a whole. The lower limit of water inferred for the Moon in this study is still low in comparison to the interior water contents of the Earth and Mars. The work shows, however, that the 40 year old notion that the Moon now appears to contain significantly more water than previously thought not only needs to be reassessed, it can also be quantified. For additional information see: Moon Whets Appetite for Water.
The article can be found at: F. McCubbin et al. Proc. Nat. Acad. Sci. 10.1073, 1006677107 (2010).

The thumbnail image is a crystal structure of apatite Ca5(PO4)3(F,OH,Cl).
Posted by Joel Raupe at 4:50 PM