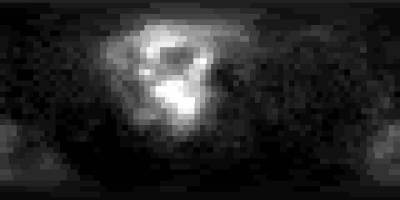 Relative brightness indicates the signature strength of Uranium on the lunar surface, mapped using the fast and slow neutron detection on-board Lunar Prospector (1998-1999). Even at low resolution the outline of Mare Imbrium and the Copernicus cluster standout. Like more familiar maps showing the more abundant radioactive element thorium, the areas in and around the enormous South Pole-Aitken Basin can be seen [NASA/LSI]. 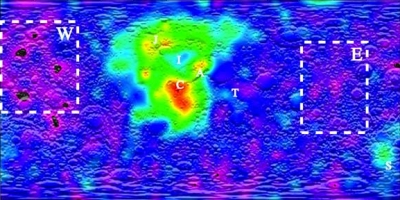 The well known "spike" in uranium prevalence surrounding Imbrium and most notably Copernicus and Fra Mauro is verified in this study of data gathered using Japan's lunar orbiter Kaguya (SELENE-1). The Imbrium signature is indicative of either the elemental make-up of the progenitor or of the lunar interior, or both. Its antipodes near on the far side overcame a low threshold of signal-to-noise ratio, but looks are deceiving. Data show the "spike" northwest of Copernicus, for example, demonstrates only relative abundance, amounting to only 2.1 ppm, according to this latest study. [JAXA/SELENE/N. Yamashita et al., Geophysical Research Letters].
Charles Q. Choi
Space.com

A new map of uranium on the moon has revealed the lunar surface to be a poor source of the radioactive stuff, but it could help solve mysteries as to how the moon formed.

Proponents of lunar bases and future lunar colonies have long pointed to many of the moons minerals, along with water, as being useful to support such efforts.
Read far from the last word
on the subject, HERE.
Posted by Joel Raupe at 3:04 AM