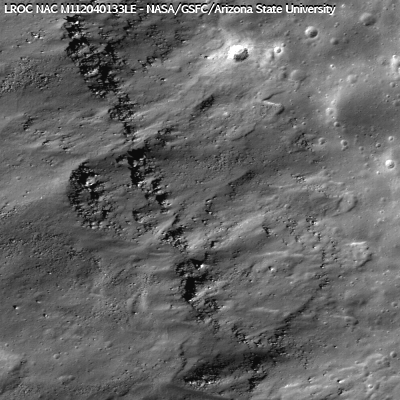 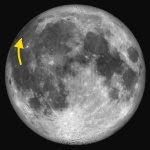 Mike Zanetti
LROC News System
Lichtenberg crater is of Eratosthenian age, 20-km across and 1.2-km deep, located in western Oceanus Procellarum (31.8°N and 292.3°E). It is named after George C. Lichtenberg (1742-1799), a German professor of experimental physics, specializing in the study of static electricity.
Lichtenberg has an extensive ejecta blanket with highly reflective rays which extend to the North more than 100 kilometers from the crater rim. Within the detailed image shown above, distinct layering inside the crater wall can be seen. These layers are probably outcrops of the original surface lavas which were deposited before impact event.

Enhanced color Wide-Angle Camera view of Lichtenberg crater (~20 km in diameter). High reflectance rays of ejecta extend from the crater to the North (gray areas) while the rays in the south and east have been buried by basalts (dark blue areas). The 689, 566, and 415 nm filters are in red, green, and blue, respectively. LROC WAC image M122659235C [NASA/GSFC/Arizona State University].

Lichtenberg's high reflectance rays are caused by impact-related ejection of high albedo highland material from beneath the low albedo mare basalts that flooded the region before the crater formed. In the enhanced color wide angle camera (WAC) image above, the bright rays of ejecta can be seen extending away from the crater to the north. However, they are not visible to the south and east of the crater. This is because in this region, the ejecta blanket was later buried by mare basalt. The stratigraphic principle of superposition tells us that this basaltic flow must be younger than the Lichtenberg impact crater, and is thus one of the youngest volcanic deposits on the Moon! This young basalt flow is characterized by its dark, smooth, and homogeneous surface with a low crater frequency, compared to other areas around Lichtenberg crater.

This exciting region near the southeast rim of Lichtenberg is a Constellation Region of Interest.
Exploration of this ROI offers the opportunity to study one of the youngest surfaces on the Moon. Crater size-frequency distribution measurements suggest that Lichtenberg crater rays southeast of the rim are covered by basalts that are approximately 1.7 billion years old. However, this region has not yet been sampled directly during any lunar mission, so this age is only an estimate. Sending astronauts to the southeast rim of Lichtenberg will offer the opportunity to collect samples of these mare basalts and determine the age of this youngest lunar volcanism to better understand the geological evolution of the Moon.

Explore the Lichtenberg Crater Constellation Region of Interest yourself! 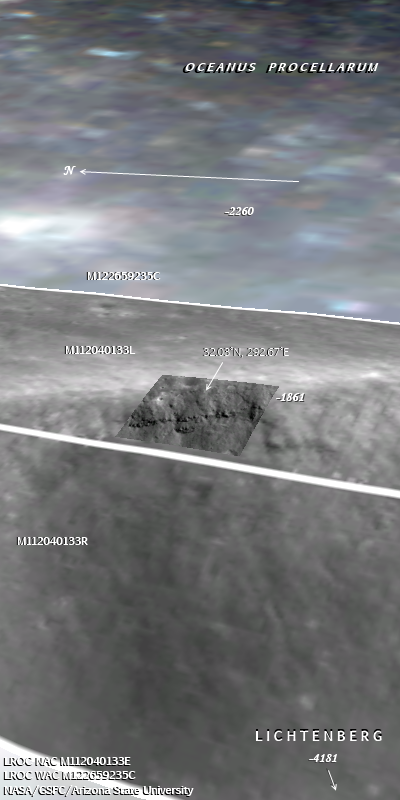 Looking east by northeast over the rim of Lichtenberg Crater shows the elevation differences and unusual morphology of the terrain excavated by this unique crater in the far northwestern Oceanus Procellarum. The LROC Featured Image is set within the Narrow-Angle Camera field from which it was taken, and its companion frame, both set upon the Wide-Angle Camera context shown above. 20 km- wide Lichtenberg, as a relatively recent formation with ejecta subsequently covered adds evidence to even more recent morphology. The elevations marked are at distinct points, Lichtenberg averages 500 meters less deep than the -4181 meter depth found at one location on it's floor [NASA/GSFC/Arizona State University].
Posted by Joel Raupe at 1:37 AM