Another look at Reiner Gamma 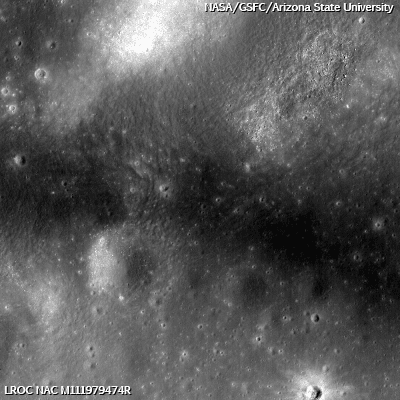 The heart of the Constellation Region of Interest in the Reiner Gamma swirl. Astronauts exploring this region will address longstanding questions about the origins of this distinctive natural feature. Image field is 510 meters across [NASA/GSFC/Arizona State University].
Bashar Rizk
LROC News System 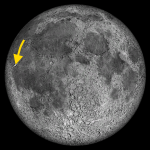 First identified by early astronomers during the Renaissance, the Reiner Gamma formation has been a subject of intense scientific study for almost five decades and is one of the highest-priority targets for future human lunar exploration.

Reiner Gamma is one of the most distinctive natural features on the Moon. This striking, tadpole-shaped swirl has a significantly higher reflectance than the surrounding mare basalts.
- 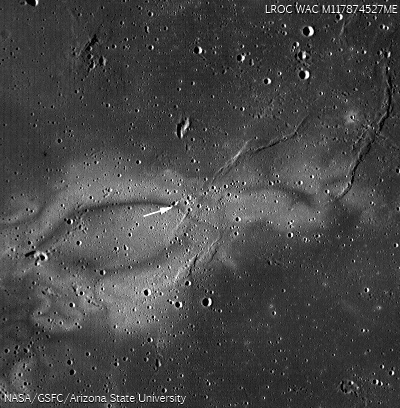 LROC Wide-Angle Camera monochrome context image of the Reiner Gamma swirl. (Arrow indicates approximate location of the Narrow-Angle Camera detail above.) The field of view is approximately 80 km (M117874527ME) [NASA/GSFC/Arizona State University].
Several LROC Featured Images have shown spectacular new images of the swirls near Mare Ingenii which are similar to the swirls of Reiner Gamma. Reiner Gamma, however, is the "prototypical" lunar swirl.

A concept that comes up frequently in lunar science is "space weathering." This term is used to describe a suite of natural processes (including micrometeoroid impacts and exposure to solar wind) that can alter the spectral properties of lunar surface materials.

Since the reflectance of the lunar surface within the Reiner swirl is so different from the surrounding mare, some process may have altered the space weathering susceptibility of the swirl materials. There are several theories to account for the presence of the Reiner Gamma swirl. Results from previous lunar missions (including Lunar Prospector) have indicated that the swirl region has an elevated magnetic field, so it's possible that an event hundreds of millions of years ago modified the magnetic properties of the surface materials, deflecting the solar wind and changing how the reflectance is modified by space weathering. 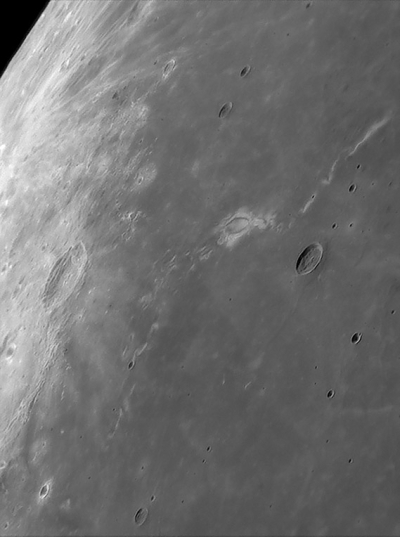 The most familiar lunar swirl graces the western expanse of Oceanus Procellarum, as seen from Earth. The crater Reiner (right, center) is 31 km across. [Astronominsk, September 2007].
Some investigators have proposed that the coma of a comet - streaking in just above the surface - interacted with the lunar surface, changing the surface properties to the degree where the Reiner Gamma swirl could persist for millions of years.

However, based on the available data, we just don't know for sure! That's not a bad thing; if we knew all the answers to all of these interesting problems, we wouldn't ever need to explore! We will not know what caused the swirls of the Reiner Gamma formation until human explorers return to this region to do the fieldwork and collect the samples that will enable us to answer this fundamental scientific question.

Plan your own adventure to the enigmatic swirls of Reiner Gamma! Think about where you would go to answer these scientific questions! 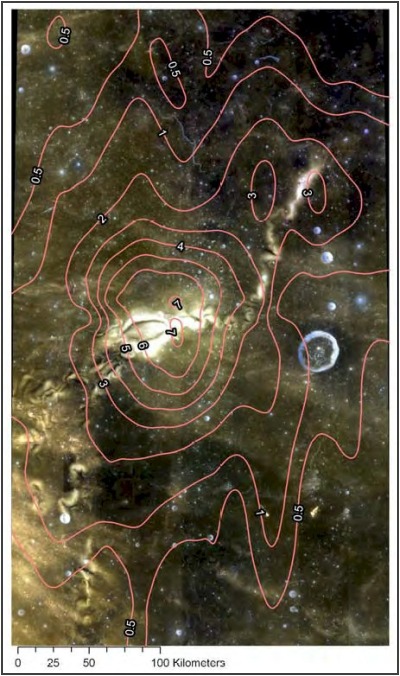