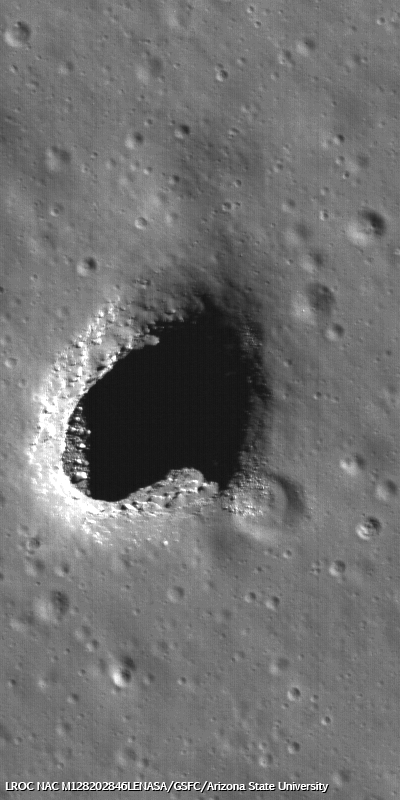 Impact craters are visible everywhere on the Moon, but pits are rare. This pit in Mare Ingenii (35.95°S, 166.06°E) is about 130 meters in diameter! Image width is 220 meters, illumination is from the upper right, NAC M128202846LE [NASA/GSFC/Arizona State University].
Lillian Ostrach
LROC News System 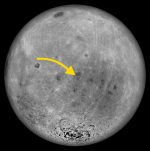 Mare Ingenii may be best known for its prominent lunar swirls, which are high albedo surface features associated with magnetic anomalies. However, lunar swirls are not the only unique geologic feature found in the farside "sea of cleverness". The high-resolution cameras aboard the Japanese SELENE/Kaguya spacecraft first discovered this irregularly-shaped hole, visible in the opening image at LROC's 0.55 m/pixel resolution. The boulders and debris resting on the floor of the pit are partially illuminated (left side of the pit, above image) and probably originated at the surface, falling through the pit opening during collapse. 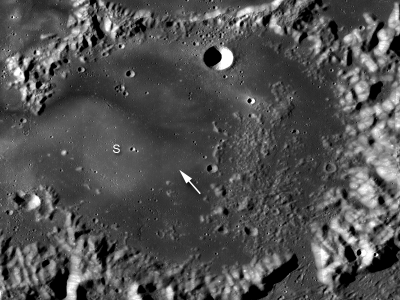 Arrow indicates location of pit. "S" indicates one of the numerous lunar swirls located in this region. Portion of LROC WAC mosaic, 200 m/pixel resolution; image width is 160 km [NASA/GSFC/Arizona State University].
A pit in the Marius Hills region, previously discovered by the JAXA SELENE/Kaguya mission, is thought to be a skylight into a lava tube in the rille-riddled region. Similar to the Marius Hills pit, the pit in Mare Ingenii is probably the result of a partially collapsed lava tube. However, the numerous volcanic features of the Marius Hills (such as the prominent rilles and domes) are not found in Mare Ingenii - so how did this pit form? Future human exploration to this location would surely help scientists answer this question!

Peer into the depths of this exciting
LROC NAC frame! 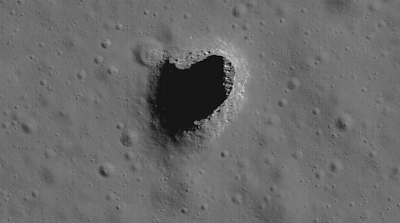 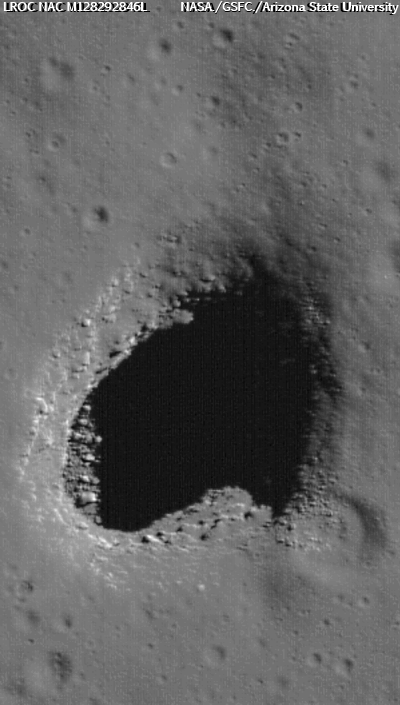 As LRO approaches its first anniversary, perhaps the greatest accomplishment by the wide-ranging team operating the vehicle is the opportunity to relearn a lesson that continues to escape notice by many:
No understanding of Earth can be complete without a proper study of the Moon.
Above we see the sinkhole at Mare Ingenni (35.95°S, 166.06°E), one of three similar pits, holes or "caves" discovered on the Moon so far. It's not possible for us to improve on the LROC NAC M128202846LE frame, nor any other product produced by Dr. Marc Robinson and his team at Arizona State University. So we try, instead, to offer different perspectives. Hopefully this may inspire others to study the Moon also. Above, we trade a loss of resolution for a "closer" look at Ingenii Cave, and from a pilot's angle, putting a depth of field in the mind's eye. The obvious stratigraphy, just below the dusty surface, begs for a closer investigation. [NASA/GSFC/Arizona State University].
Posted by Joel Raupe at 9:22 PM