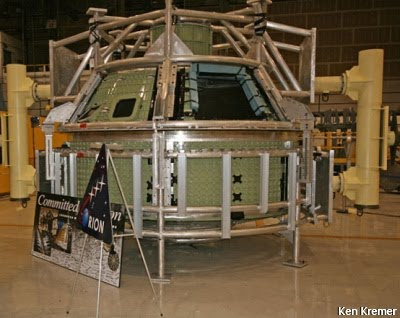 The first Lunar Test capsule for people since Project Apollo has just been welded into shape. This work finishes the structural framework of the pioneer Orion crew cabin – known as the Ground Test Article – or GTA, by a Lockheed Martin contractor team toiling away at the historic NASA-owned Michoud Assembly Facility (MAF) in New Orleans [NLSI/Ken Kremer].

Ken Kremer
SpaceRef.com
Lockheed Martin and other contractors working on NASA's endangered Constellation program now have no choice but to delay or halt forward progress on major aspects of the 'Return to the Moon' program and that will quickly cause numerous jobs cuts rippling across the US.
These actions are a direct result of new budget and contract guidance from NASA Administrator Charles Bolden with regard to contract termination liabilities for Project Constellation if the project is cancelled. This could effectively kill the moon program as desired by the Obama Administration, despite a Congressional legislative ban on changing or cancelling Constellation without the agreement of Congress.
"The impact of termination liability on the contract has necessitated a 20 percent reduction across the program within Lockheed Martin as well as our subcontractors and suppliers", says Cleon Lacefield, Lockheed Martin vice president and Orion program manager. Lacefield told me that "Orion procurements are being reduced to allow work to continue within the budget limitations and about 600 positions among the Lockheed Martin and subcontractor workforce are being moved off of the program to adjust staffing needs."
These cutbacks come directly on the heels of Lockheed Martin just completing the structural framework of the first Lunar Orion test capsule at NASA's Michoud Assembly Facility in New Orleans as reported in my illustrated Orion feature story on June 7 here.
Bolden outlined the job and budget issues in stark terms in a June 9 memo to the chairs of the key Congressional committees that have NASA oversight.
The issue is who is liable to pay for the costs of terminating NASA contracts; NASA or the contractors. Bolden states that according to the "Anti-Deficiency Act" the contractors must now set aside funds to cover the termination liability costs in case the contract is cancelled.
NASA estimates the termination liability costs this year to be almost $1 Billion and must be accounted for before the end of the fiscal year in September 2010.
Read the full article, HERE.
Posted by Joel Raupe at 7:54 PM

I have gone through this blog. I found it very interesting and helpful. Nowadays I am completing my online degree course from home.
So this blog really doing great for me.