LROC: Forked flow on the Far Side 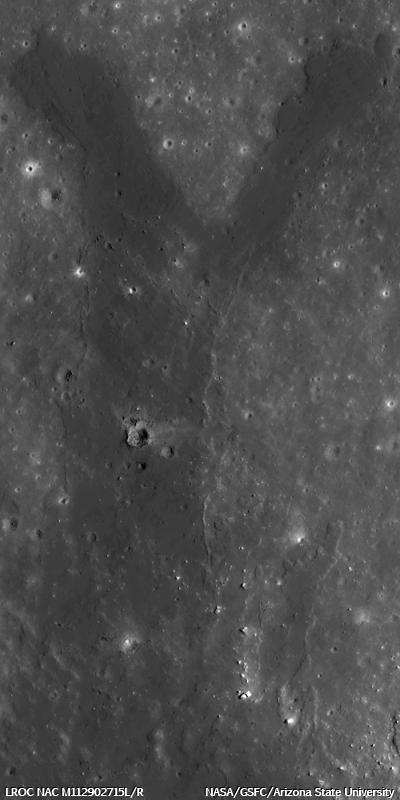 Impact melt flow split into two distinct segments. The source crater is 2.5 km to the south in the Steno-Tikhomirov region of the northern Far Side highlands (ENE of Mare Moscoviense). The field of view is 900 meters. The LROC Narrow Angle Camera frame M112902715L was imaged in LRO orbit 1772, last November 15, from 55 km over 30.02°N, 160.99°E. The forked impact melt flow is one of numerous exciting geologic features found on the Far Side. [NASA/GSFC/Arizona State University]. 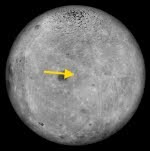 Young, Copernican-aged lunar impact craters exhibit spectacular deposits of lava-like material produced by shock melting in and around the craters. These lunar impact melts are observed as thin, hard-rock veneers, flows, and ponds. Today's Featured Image highlights a spectacular example of a large impact melt flow that flowed from a young small highlands crater (~3.1 km in diameter). The distal portion of this curved impact melt flow splits into two separate flows (opening image) about 2.5 km from the crater rim. What caused this impact melt flow to fork?

Local topography most likely influenced the impact melt flow path. At the point where the two flows diverge, the main flow is 320 m wide. The northern flow segment extends 675 m beyond the point of divergence and is 200 m wide near its end. The northeastern segment extends for 550 m from the main flow and is 210 m wide near its end. Both flow segments exhibit numerous cracks along portions of their lengths. 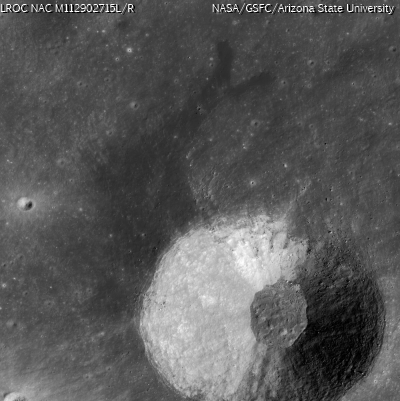 This context image is a thumbnail of a larger mosaic of the central portion of two complementary NAC frames (M112902715L and R), showing the forked impact melt flow and source crater. Field width is 4.3 km, and illumination is from the east, with a spacecraft-target-solar incidence angle of 51.65° [NASA/GSFC/Arizona State University].

Investigate the impact melt flows at other locations around this crater for yourself! 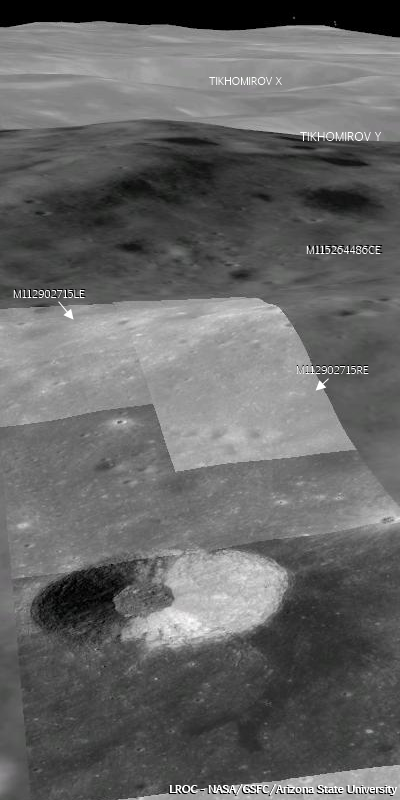 Inset from a larger notional wallpaper image showing the "view" overlooking the Far Side lunar highlands in the vicinity of the two loosely associated crater groups, Steno-Tikhomirov, east of Mare Moscoviense. The simultaneous Narrow Angle Camera frames overlay the southern end of LROC Wide Angle Camera frame M115264486CE, nested within the digital elevation model available to users of the Google Earth program (>v.5). The smooth, forked impact melt is visible on the north-northeast outside slope of the unnamed source crater, at bottom [NASA/GSFC/Arizona State University/USGS/JAXA/Google]. 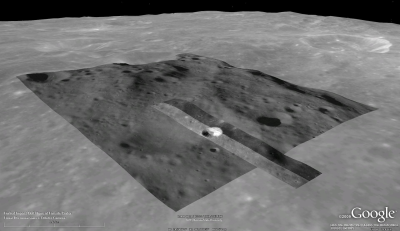 Thumbnail of a full-sized wallpaper mosaic, the "view" looking south-southwest over the Steno-Tikhomirov region of the far side lunar highlands, at middle latitudes north of the equator, east of Mare Moscoviense [NASA/GSFC/Arizona State University/USGS/JAXA/Google].
Posted by Joel Raupe at 8:31 PM