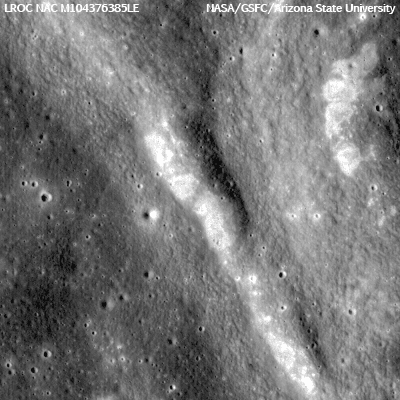 Close up of a northwest trending wrinkle ridge in the high-Titanium basaltic lava plains of Mare Tranquillitatis, near a Constellation region of interest. The bright areas of along the steepest parts of the ridge are places where less mature subsurface materials have been exposed by small impacts or fracturing of the bedrock as the original mare surface buckled. (1.25 km wide area from LROC NAC M104376385L; Orbit 542, August 8, 2009; alt. 123 km) [NASA/GSFC/Arizona State University].
Mike Zanetti
LROC News System 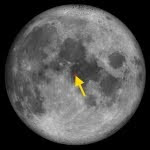 The Constellation region of interest in Mare Tranquillitatis is a good example of a site that combines operational benefits with fascinating geologic features. An equatorial nearside location where landings would be fairly straightforward, the most obvious feature that draws your eyes in this Region of Interest is the dramatic wrinkle ridge that dominates the landscape. Wrinkle ridges like these are common on lunar mare surfaces and have long been a subject of interest to lunar scientists. 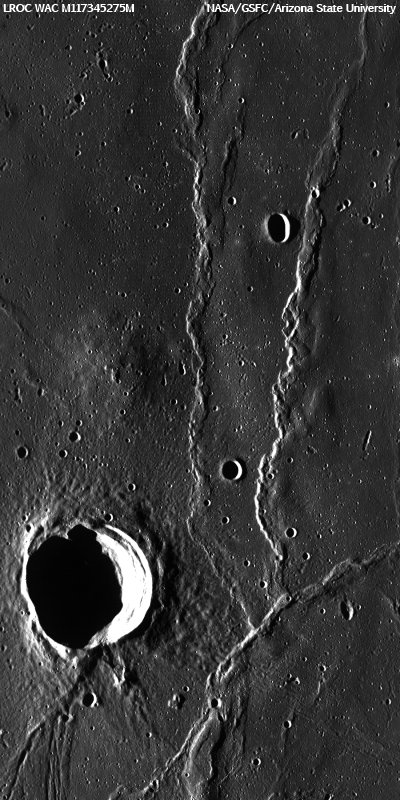 Long wrinkle ridges in Mare Tranquillitatis in LRO Wide Angle Camera (WAC) image M117345275M. The section of wrinkle ridge shown in the featured NAC image is in the center of this WAC view. Arago crater (lower left), is 26 km in diameter. Above it is Arago Alpha, one of two extensive 20 km lava domes in the vicinity of Arago familiar to Earth-bound observers when the long shadows of the terminator sweep through the area 5 days after each New Moon or 4 days after a Full Moon [NASA/GSFC/Arizona State University].

Lunar wrinkle ridges can be hundreds of kilometers long, tens of kilometers wide, and hundreds of meters high. (Read more in Wilhelms, 1987) They can have a sinuous or linear appearance with asymmetric cross-sections. In other words, the feature that you see could easily be made up of a smaller ridge superposed on a broad rise. 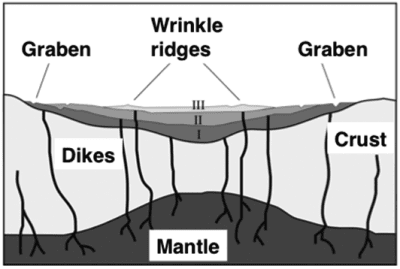 Idealized cross-section through an impact basin that filled with three episodes of mare basalt eruptions [Hiesinger, 1999, PhD dissertation]. Loading of the basin floor with mare basalts causes the formation of wrinkle ridges in the basin center and graben along the mare margins.
We also know, thanks to the samples collected by the Apollo 11 astronauts, that the mare basalts in this region are rich in titanium. Study of the Apollo samples has shown that it is relatively straightforward to extract resources (especially oxygen) from titanium-rich lunar soils. Using local resources will increase the capability and reduce the cost of future lunar exploration.

Explore the wrinkle ridges in Mare Tranquillitatis! Or browse other Featured Images containing wrinkle ridges near Montes Teneriff and northwest of Mare Imbrium.
Posted by Joel Raupe at 5:12 AM