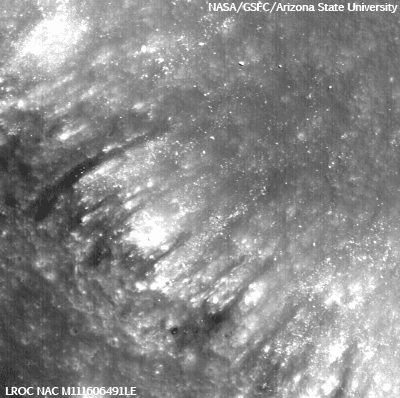 LROC Narrow Angle Camera closeup of a fracture in the northeast floor of Alphonsus crater. Dark pyroclastic materials are intermixed with lighter rocks and boulders from the fracture walls and appear to have moved in streamers toward the fracture floor at upper right. A NASA Constellation Region of Interest exploration site is centered to the southeast of this view. (Image width is 538 m, LROC NAC M111606491L) [NASA/GSFC/Arizona State University].

Many fractures on the Moon are seen in the floors of ancient, flat-floored highlands craters. Such fracture networks often encircle all or part of the crater floor, and in some areas they show accumulated deposits of dark volcanic material. This NAC image above (538 meters across) shows a portion of one such fracture, located in the northeastern floor of Alphonsus crater.

The fracture has been mantled by a dark, fine-grained pyroclastic deposit that appears to have moved down the wall of the fracture (at left) toward the floor (out of view to the upper right). The wall of the fracture is composed of light-colored rocks that are typical of the lunar highlands (mostly composed of anorthosite). Rocks and boulders of this bright material have also moved down the fracture wall; the largest one (near the top, center of the image) is about 8 meters across in its longest dimension. In some areas near the top of the fracture wall, dark boulders and mantling materials are seen. It is likely that this dark volcanic material came from a nearby volcanic vent located along this fracture network. Sunset Crater National Monument in Flagstaff, Arizona, an example of a cinder cone on Earth, is about 600 meters wide and 340 high [USGS/NPS].

In part because of these fascinating volcanoes in the floor of Alphonsus, this area was considered as a possible landing site for the Apollo 16 and Apollo 17 missions. The Ranger 9 spacecraft impacted in Alphonsus to the northeast of the central peak. Scientific interest in this crater remains high, and so Alphonsus is a high-priority target for the future human and robotic expeditions to the Moon.

Explore the Alphonsus crater Constellation region of interest for yourself. 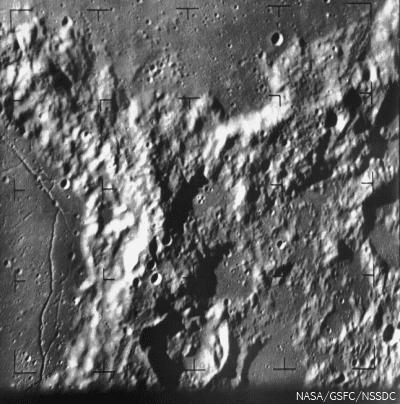 Northeast rim of Alphonsus crater from 700 km. Ranger 9 camera B image of the northeast rim of Alphonsus crater at left, and southern rim of Ptolemaeus crater at the top. Though this image quality is matched by amateur equipment today, the subsequent images returned as Ranger 9 rushed toward impact were trailblazing, and enlightening. All three major television networks interrupted highly lucrative Saturday morning television to cover Ranger's demise. Millions watched anxiously, only forty five years ago, as this 1150 line Vidicon television still rendered "live" on their televisions at home. The scene was shot from 703.1 kilometers away from a hard impact only 4.5 minutes later. The field is approximately 120 km across and north is at top. (Ranger 9, B035) [NASA/JPL/NSSDC/GSFC.]
Posted by Joel Raupe at 7:08 AM