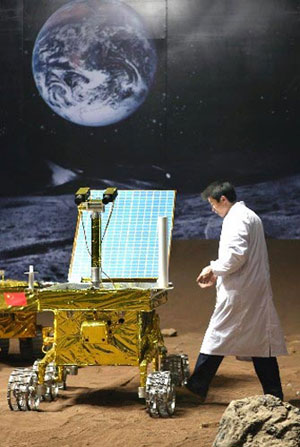 Even as the Chinese National Space Agency (CNSA) prepares for a pending follow-up to the PRC's first lunar orbiter, Chang'E-1, the Chang'E-2, now scheduled for launch in October, preparations are underway for their first lunar orbiter planned as part of the Chang'E-3 mission in 2017. Pictured is one of the earlier prototypes, evoking successful design styling reminiscent of Lunokhod, Surveyor, and Mars Expedition Rovers .
Zhang Jiawei
China Daily

China has completed creating a lunar rover, which will be sent to the moon by the Chang'e-3 lunar orbiter in 2013, the People's Daily Overseas Edition reported Tuesday.

The lunar rover is expected to carry out an exploration program in 2013 and return in 2017, the newspaper said.

"Please remember, this lunar rover is created by China," Ye said repeatedly during a lecture in Chongqing.
Posted by Joel Raupe at 3:32 AM