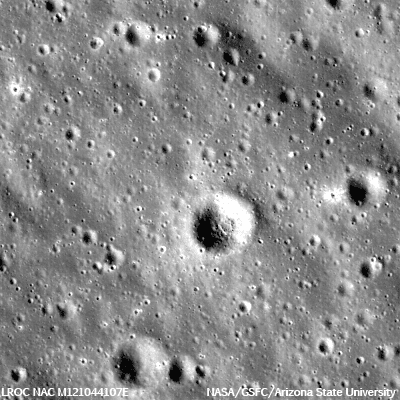 Highlands terrain inside the Dante Crater Constellation Site. A portion of LROC NAC image M121044107E, 580 meters across. [NASA/GSFC/Arizona State University]
In Situ Resource Utilization
& an unobstructed view of the Cosmos 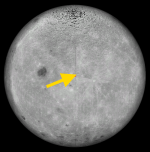 Only a handful of humans have ever seen the far side of the Moon. In the future, human explorers near Dante crater in the far side highlands will be searching for samples of the Moon's most ancient, primordial crust (anorthosites like the famous Apollo sample 15415). There was a time after the Moon's formation when the entire surface was covered by an ocean of magma; the upper layer of this magma ocean crystallized to form a global layer of anorthosite.

Since that time, impacts and other geological processes have broken and churned the surface, but this area may posses significant amounts of these original rocks.

Pristine lunar anorthosites are relatively rare in the Apollo sample collections; with enough samples we could learn when the primordial crust started to form and when it was complete. Scientists would also like to learn the rate of cratering during this early period in the Moon's formation. The ancient regolith contains rocks that formed from impact melt, which can be dated to learn when the impact even that created them occurred. Did the large impacts form across a broad range of time - or in one large spike? Collecting samples from this ancient highland area would help use better understand this early period in Solar System development, with profound implications for understanding the early history of Earth. 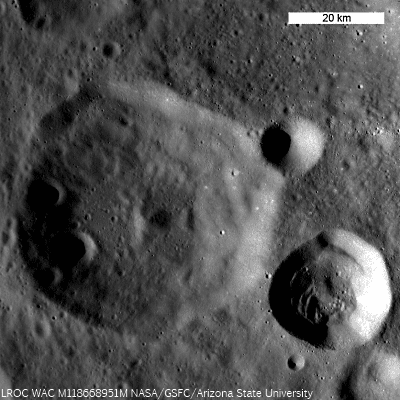 The Dante region has abundant aluminum and calcium-rich regolith that is available for in situ resource utilization, allowing explorers to extend their stay in this region by processing the local materials to produce oxygen and fuel while building habitats and other structures.

Explorers at this location would never see the Earth. They would instead see the unobstructed vista of the Milky Way above them. The Sun would rise and set once a month, but all communications back to Earth would have to be via orbiting relay satellites. However, with the bulk of the Moon shielding this location from the bright lights and radio waves of the Earth, the central farside highlands are an optimal location for astronomy, especially observations of the low-frequency radio sky.

Explore the Dante crater constellation region of interest for yourself.
Posted by Joel Raupe at 12:00 AM