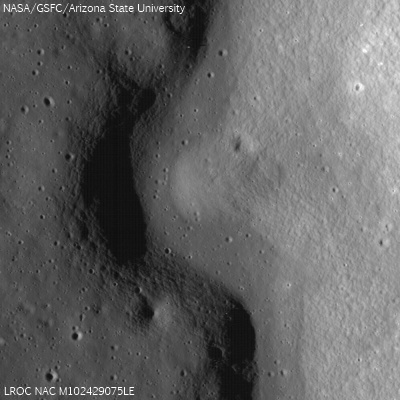 A sinuous rille created by a lava flow snakes around the base of a massif in the Prinz-Harbinger region on the Moon. Image width is 1.46 km, from LROC NAC frame M102429075L [NASA/GSFC/Arizona State University].
Brent Garry
LROC News System

When choosing a site for future human or robotic lunar exploration, access to a diversity of geologic features in the area is taken into consideration. The Prinz-Harbinger area is a Constellation region of interest because there is a concentration of sinuous rilles, massifs, and mare filled impact craters, as well as potential lunar resources (Fig. 1). The topography is reminiscent of the Apollo 15 landing site where there is a rille bound by nearby massifs. Rilles provide information on lava flow processes that created the lunar maria and provide an opportunity to collect samples from exposed bedrock. The massifs at this site are related to the Imbrium impact basin and have a different lithology from the surrounding mare units based on multi-spectral data. The regolith contains pyroclastic deposits from volcanic eruptions that could be used for in situ resource utilization (ISRU) by future crews.
The use of local resources not only reduces the cost of exploration, but also enables explorers to increase their time on the surface and make even more discoveries. 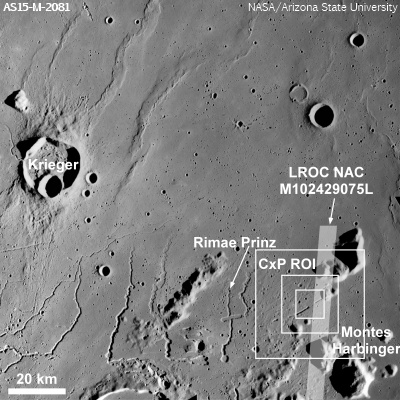 Figure 1. Apollo 15 image AS15-M-2081 of the Rimae Prinz region. White boxes show the coverage of the Constellation Region of Interest (CxP ROI) at distances of 10, 20, and 40 km surrounding the rille. Footprint coverage of the NAC frame is given for context [NASA/Arizona State University].
The massif featured in Fig. B is ~600-700 m in relief, while other massifs in the Montes Harbinger chain are up to 2000 m in relief (Fig. 1). Note the elephant texture on the southern slopes changes to a smoother darker texture before the bottom of the hill (arrows in Fig. 2). This shows that the base of the massif was partially buried by lava flows related to the volcanic activity and rille formation in the area. The rille adjacent to the massif is ~450-500 m wide and a few 100 meters deep. The CxP ROI is centered on a gap in the rille, which could be a roofed over portion that forms a lava tube. Lunar lava tubes, while potentially difficult to access, are of high interest for both their geologic information about the emplacement of lava flows and their potential as a natural place of refuge and possibly even habitation for future explorers. 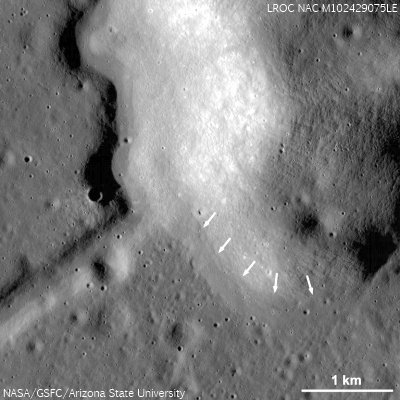 Figure 2. A lunar rille forms at the base of the massif in the Constellation Region of Interest (CxP ROI). Arrows point to location along massif possibly covered by lava flows, due to the lack of 'elephant skin' texture on this part of the hill slope. LROC NAC M102429075L [NASA/GSFC/Arizona State University].
Explore the rilles and massifs in the Prinz-Harbinger region. 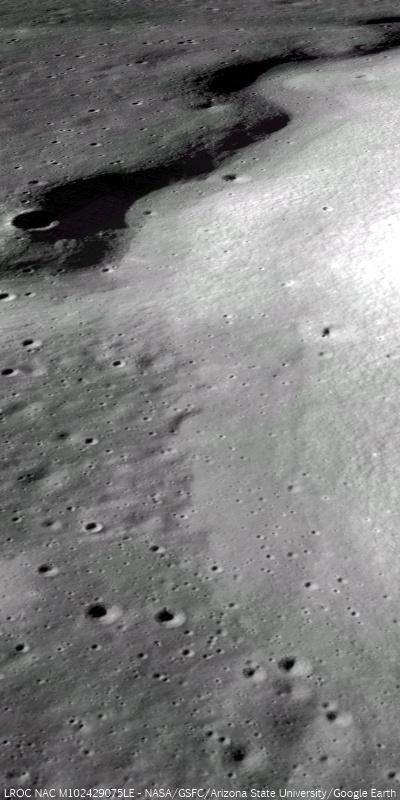