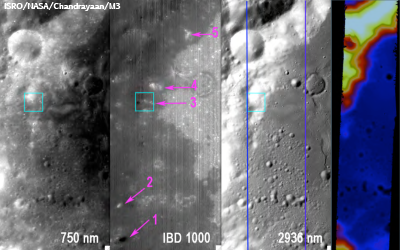 Figure 1. Inner ring of the Moscoviense Basin and the western mare basalt fill. The first three images are M3 data (40 km across track). The 750 nm image is albedo, IBD 1000 is continuum-removed integrated band depth for the ferrous 1 μm band, and 2936 nm is the long-wavelength image that enhances topography. The purple arrows point to the 5 anomalous regions. The two vertical lines in the third image indicate the coverage of TMC. On the right is a DEM derived from TMC data spanning ~ 4 km from top of the ridge crest to the mare basalt floor.

Introduction. The canonical characterization of the lunar crust is based principally on available Apollo, Luna, and meteorite samples. The crust is described as an anorthosite-rich cumulate produced by the lunar magma ocean that has been infused with a mix of Mgsuite components. These have been mixed and redistributed during the late heavy bombardment and basin forming events. We report a new rock-type detected on the farside of the Moon by the Moon Mineralogy Mapper (M3) on Chandrayaan-1 that does not easily fit with current crustal evolution models. The rock-type is dominated by Mg-spinel with no detectable pyroxene or olivine present (<5%). It occurs along the western inner ring of Moscoviense Basin as one of several discrete areas that exhibit unusual compositions relative to their surroundings but without morphological evidence for separate processes leading to exposure. 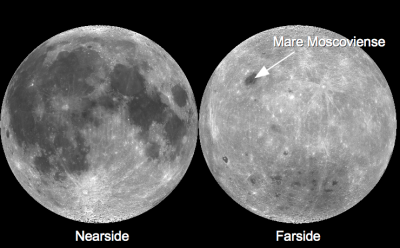 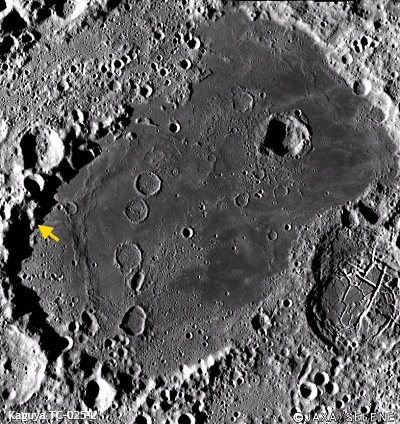 With illumination from a late afternoon sun on Mare Moscoviense on the Moon's far side (time corresponds with the waning phase, between First Quarter and Full Moon, as seen from Earth), the area of interest to Dr. Pieter and her colleagues is nearly in shadow (arrow) [Kaguya Terrain Camera/JAXA/SELENE].

New Compositional Data. Lower-resolution M3 image strips have been collected for >95% of the lunar surface [1] and are being processed and validated [2]. Spectroscopic data discussed here were acquired 1/25/2009 from a 100 km orbit of the first optical period. Field of view is 40 km, spatial resolution is 140 m/pixel, and spectral resolution is 20-40 nm including 85 channels between 460 and 3000 nm.

M3 data across the western edge of Mare Moscoviense is shown in Fig. 1. A digital elevation model (DEM) derived from the Terrain Mapping Camera (TMC) on board Chandrayaan-1 [3] is shown for comparison. Lunar Prospector and Clementine data show the crustal material of this region to be highly feldspathic [4] and the mare fill represents diverse basalts [5]. Geology is discussed in [6]. M3 compositional data are consistent with the earlier data: the pervasive low integrated band depth (IBD) along the basin ring indicates very low abundance (<5%)> of mafic minerals and the high IBD for the mare (and especially craters) reflects their high pyroxene abundance. Five anomalous areas along the lower elevations of the ring are indicated with arrows. 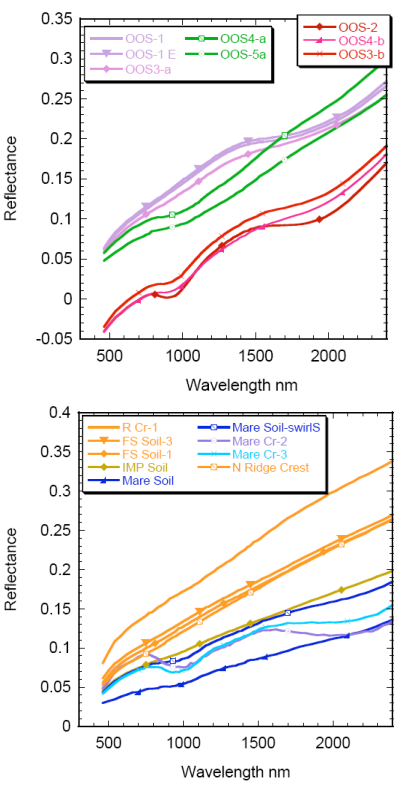 Spectra for representative regions across Moscoviense are compared with those of the anomalous regions in Fig. 2. Data were calibrated (K level), transformed to apparent reflectance, corrected for some systematic errors, and truncated at 2.4 μm to minimize the effects of a long wavelength thermal component. The feldspathic soil of the region (FS), possible impact melt (IMP), and rim crater (R Cr) all exhibit featureless spectra devoid of mafic minerals. Spectra for the mare soils and craters exhibit the expected features of high-Ca pyroxene. In M3 image data, no fresh craters can be seen to be associated with any of the five spectrally anomalous areas. High-resolution TMC data (5 m/pixel) are available for areas 3, 4, & 5. For each area, no unusual features are observed that might indicate the surface has been disturbed. Orthopyroxene is prominent throughout region 2 and observed at parts of regions 3 and 4. Olivine is observed across area 5 and for parts of area 4. The spatial extent of these mafic minerals is mapped by high values in the IBD image.

The entire region 1 and a small part of region 3 has an exceptionally low value (dark) in the IBD image. This is because the spectra are actually concave near 1 μm and no pyroxene or olivine can be detected (<5%). On the other hand, these spectra exhibit a prominent 2μm absorption, the character of which is better seen in spectra relative to a FS region matched to remove the continuum shown in Fig 3. The clear interpretation of these spectra are that the surfaces represent a rock type dominated by Mg-rich spinel with no detectible other mafic minerals (but probably feldspathic in character). (See [8] for a different form of spinel detected by M3.) We have considered both exogenic and endogenic origins for the OOS. Since the only other spinel-rich surfaces detected with remote sensors are a few primitive main-belt asteroids [9], one hypothesis is that these exposures represent the breakup of a multi-component (rubblepile) asteroid as it passed through the Earth-Moon system. Although the OOS exposures are relatively linearly aligned, special circumstances would be required to allow the impactor to survive. More likely, the OOS suite represents a new and fundamental crustal component of the Moon, uplifted from depth during the basin-forming event. Separation of relatively dense spinel within a mafic magma pluton experiencing fractional crystallization and crystal settling could provide the concentration mechanism to account for the formation of a new rock type, a “pink-spinel” anorthosite. Additional processes are required to embed the OOS products within the LMO feldspathic crust. These processes all had to have occurred prior to the basin-forming event. 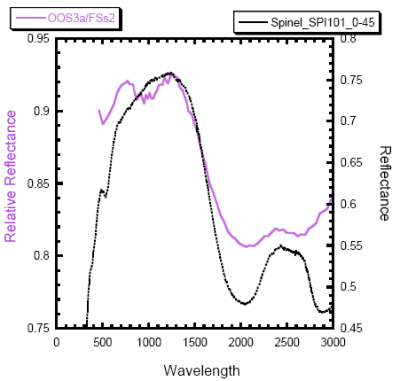 Orbiting southward over the far side's northern hemisphere, Japan's lunar orbiter "Kaguya" (2007-2009) catches the expanse of Mare Moscoviense (Sea of Moscow) in this HDTV clip, now available on YouTube. Looking south, the area of interest is center, extreme right. (The LRO Constellation candidate for a possible future manned landing sight is just inside the southern rim of basin at the center) [JAXA/NHK/SELENE].

I have 1 kg from this typeof Meteorite fall of spenil .