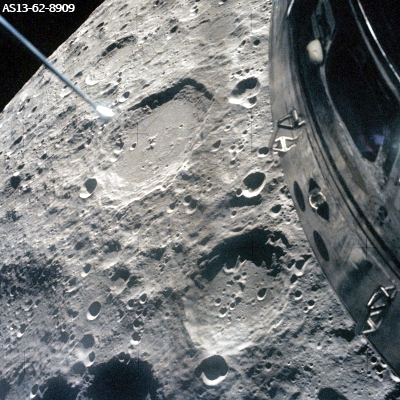 The view out the window of their impromptu lifeboat Aquarius, the Apollo 13 Lunar Module, less than a day after the Service Module LOX tank explosion that nearly doomed the crew. The time was around sunset, April 15, 1970, back home in Houston, ~398,600 kilometers below. Apollo 13 has just emerged from the Far Side terminator, and the view out from Aquarius, looking past the frosty, crippled Command Module Odyssey is of the long evening shadows of the lunar southern hemisphere, perhaps 15 minutes before reacquisition of signal. During the radio blackout, Apollo became the only manned spacecraft to take full advantage of a free-return trajectory. Apollo Lunar Surface Journal Contributor Danny Caes writes, "The two major craters in this photograph are Chaplygin (just left of center), and Schliemann (below center)." - AS13-62-8885 [ASJ/NASA/JSC] 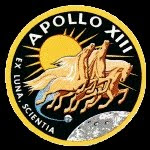 "To celebrate the 40th anniversary of the Apollo 13 mission, for 13 days, Universe Today will feature "13 Things That Saved Apollo 13," discussing different turning points of the mission with NASA engineer Jerry Woodfill."

The longest day for the crew of Apollo 13, for Jim Lovell (on what became his second trip to the lunar vicinity), Rusty Swigert and Fred Haise, had to be when their spaceship combination was traveling it's slowest. That would have been between the explosion, which occurred while they were essentially orbiting the Sun, and their flyover of the Moon's Far Side. During the long uphill climb, still expending velocity from their Earth orbit ejection, Apollo 13 was barely moving a kilometer per second, waiting for the Moon to intercept them.

For a long time, they could watch the Moon approach them in it's orbit. It was also the most anxious time, as the crew and ground controllers "worked the numbers," and they were not promising. Most of the work removing the unplanned and novel uncertainty from their flight plan lay ahead of them.

Fortunately, a lot of what is called "institutional memory," a lot of "head room" was flying with them, at the end of a long radio signal. Nancy Atkinson has been doing such an excellent job cataloging this transformation of near tragedy to triumph, we simply recommend you follow her as she racks it all up for you over at Universe Today.

What a sweet sight those parachutes were!

That's what we've been doing, and we might just watch Ron Howard's excellent film "Apollo 13," once again.
Posted by Joel Raupe at 5:34 PM

hey this is really a nice comment . thanks for sharing it wiyh us.